100 Years and Counting: The Vision and the Dream

Perhaps the most exhaustive account of the contemporary history of the Museum of the American Indian, Heye Foundation (MAI), founded on May 10, 1916, was published in 1999, following the untimely passing of its author, Dr. Roland W. Force, who served as the Museum’s director from 1977 to 1990. 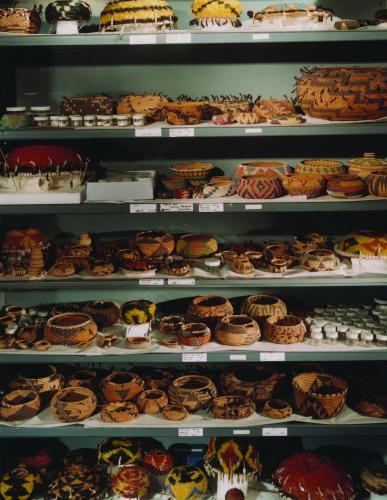 Pomo baskets stored on open shelving in the Research Branch of the NMAI, Bronx, NY, 2002. Photo by Gale Ellen Wilson

Pomo baskets stored on open shelving in the Research Branch of the NMAI, Bronx, NY, 2002. Photo by Gale Ellen Wilson 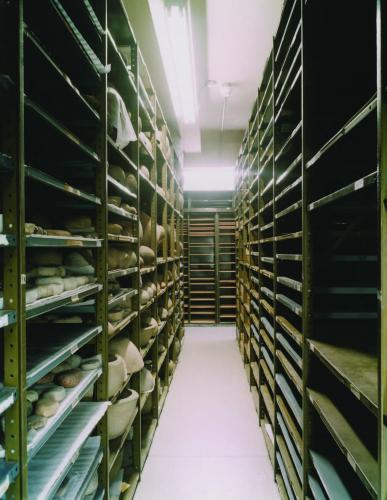 View of the storage area for archaeological objects on the third floor of the Research Branch of the NMAI in Bronx, NY, 2002. Photo by Gale Ellen Wilson

View of the storage area for archaeological objects on the third floor of the Research Branch of the NMAI in Bronx, NY, 2002. Photo by Gale Ellen Wilson 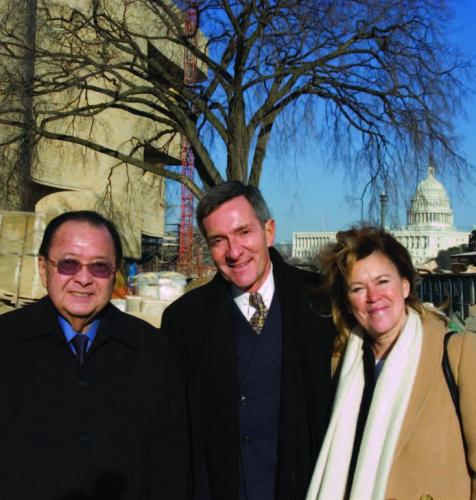 In 1996, Dr. Force’s wife, Dr. Maryanne Tefft Force – in collaboration with John Cotton Wright, M.L.S., C.A. (Emeritus) – gathered her husband’s manuscript and materials from a variety of sources related to the Heye Museum, and completed the work necessary to enable the publication of the fascinating history of the Museum. It is entitled Politics and the Museum of the American Indian: The Heye and the Mighty. It begins with these words:

Accompanying Senator Inouye were the Secretary of the Smithsonian Institution, Robert McCormack Adams, the Senate Committee’s senior staff, Alan Parker (staff director) and myself (Patricia Zell, general counsel). The meeting followed a tour, the day before, of the museum’s principal museum as well as its storage facility that housed the greater percentage of the museum’s collections.

Thus began a discussion which eventually led to the 1989 enactment of Federal legislation authorizing the establishment of a museum in the Old United States Custom House as a permanent presence for the Heye museum’s collection in the City and State of New York, as well as the establishment of the National Museum of the American Indian (NMAI) within the Smithsonian Institution in Washington, D.C. to serve as the new principal home for the Heye museum’s collection within a newly-constructed museum on the National Mall and a curational facility in Suitland, Md. – NMAI’s Cultural Resources Center.

A yearlong national dialogue amongst tribal leaders, American museums and scientific institutions preceded the establishment of the NMAI. This dialogue was instrumental in developing agreement on core values that would guide both policy and practice on a matter of great importance to Indian country as well as museums and scientific institutions – a process for the repatriation of the cultural patrimony of America’s Native people. This dialogue also informed the manner in which the legislation to establish the National Museum of the American Indian was subsequently formulated.

In my view, having experienced the challenging days of its inception, as well as its subsequent growth and evolution, the National Museum of the American Indian has expanded exponentially upon the vision of what a Museum’s collection could become. NMAI has become a place where the native peoples of the Americas can find a home away from home and comfort amongst those cherished and familiar artifacts and art that give expression not only to their past but to their living presence and the promising future which has been built upon the firm foundation of their ancestors’ legacies.

The existence of the National Museum of the American Indian has brought about dynamic changes – some of which were made possible by technological advances that have enabled the American and worldwide public to have direct pictorial access to the NMAI collection. Teachers hoping to develop relevant curriculum materials on the histories of Native people in America, their relationships with the United States, their previously less than-well-known contributions to the fabric of American society and the modern-day expressions of their cultures and lifeways have found the NMAI to be a definitive and rich source of materials on all of these matters. As a result, the NMAI has launched a national education initiative.

NMAI has also become a crucible for the discussion of contemporary issues of critical significance to Indian country and the shaping of Federal policy. Symposia dialogues involving experts on these issues have served as an important source not only in the thoughtful shaping of public policy but in the dispelling of stereotypes and their symbolic representations. And the NMAI has consistently invited members of Congress and Federal policy-makers to become constructively engaged with tribal citizens representing a broad spectrum of Native perspectives.

The National Museum of the American Indian is fulfilling its responsibilities for the maintenance and care of a magnificent and vast collection, while simultaneously creating an international awareness, knowledge and a new understanding of Native people, their cultures, languages, histories and contemporary lifeways.

Like all living beings, NMAI continues to grow and to adapt to changing circumstances. The National Museum of the American Indian is a vision and a dream in the process of being realized.

Patricia Zell served as the chief counsel and staff director of the Senate Committee on Indian Affairs for 25 years. In that capacity she was involved in the negotiations with the city and state of New York enabling the transition between the Museum of the American Indian, Heye Foundation and the Smithsonian Institution, and the development of the legislation authorizing the establishment of the National Museum of the American Indian. She served on the NMAI Board of Trustees for two terms and completed her last year of service on the Board as its Vice-Chair.