Snow snake is a game that has been played across many Indigenous communities in the northeastern United States and Canada for hundreds of years. A long wooden stick with an end that is carved to curve up slightly is covered in a slippery substance such as wax. This would be whipped down a track dug into snow that could be several hundred feet in length. The person who could propel the stick the farthest would win. 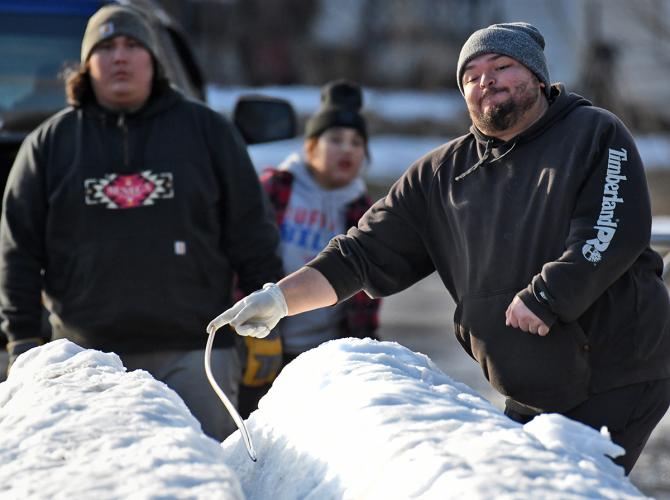 Propelling a snow snake down its track takes skill and strength.

Propelling a snow snake down its track takes skill and strength. 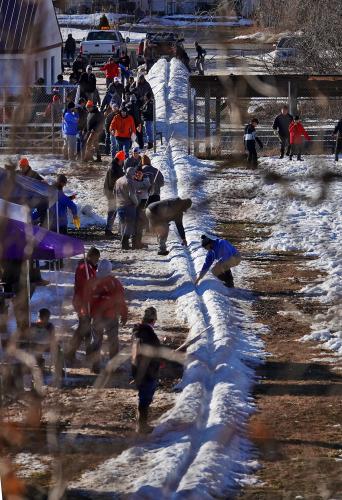 Snow snake tracks can be hundreds of feet long.

Snow snake tracks can be hundreds of feet long.

Such winter games were created not only to hone hunting skills such as spear-throwing but also to build ties between the communities that would gather to play. “Keeping these things alive is important to us,” said Shannon Booth, a representative of the Eel Clan for the Onondaga Nation who teaches the game.

In 2021, the Onondaga Nation just south of Syracuse, New York, hosted a snow snake tournament attended by hundreds of enthusiasts, including photojournalist Mike Greenlar. Although he was invited to photograph the tournament, not wanting to intrude on the players’ concentration, he shot the event with a long lens. To capture the moment the snake is released to whip down the track, “I could easily shoot 300 to 400 images,” he said.

Greenlar has been photographing Indigenous communities around the world for more than four decades. He grew up watching lacrosse games with his father, who also gave him his first camera. He has since followed the Iroquois Nationals, photographing the team from Los Angeles to England. One of his photography books covers three generations of an Algonquin family in the community of Kokomville in Canada. He said he is drawn to photograph Indigenous peoples who have “a strong sense of culture."

Booth is a lifelong participant in the snow snake game and has passed the love of it on to his sons and nephews. He said, “You just get bit.”