The Indigenous Origins of Maple Syrup

The gathering of syrup from maple trees in the woodlands of Canada and the northeastern United States is an ancient practice that had helped sustain Indigenous peoples for thousands of years. Yet during the colonial era, some lost their connection to the tree and its ceremonies. Only recently have many started to reclaim it. 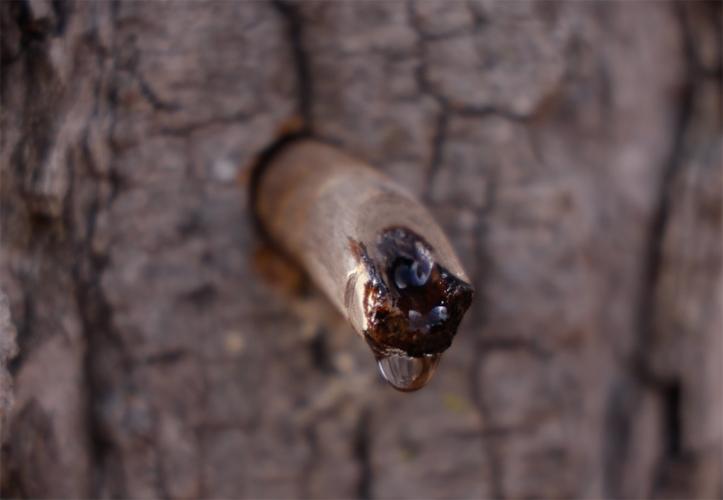 Traditionally, the process of making maple syrup begins with drilling a piece of wood into the tree to serve as a spile, or spout from which the clear sap can drip.

Traditionally, the process of making maple syrup begins with drilling a piece of wood into the tree to serve as a spile, or spout from which the clear sap can drip.

A wood basket tied to the tree below the spile collected the sap.

A wood basket tied to the tree below the spile collected the sap. 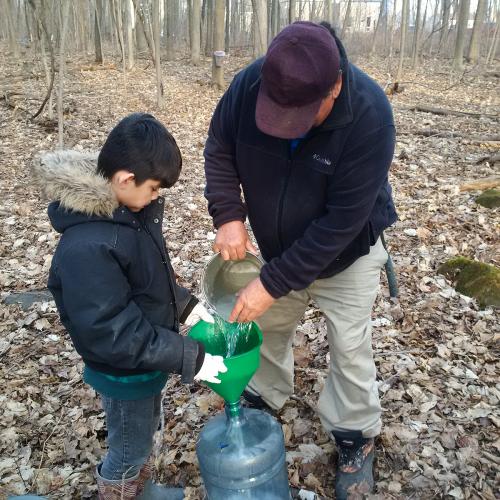 Otsi’tsaken:ra (Charlie) Patton (right) pours sap into a container while his grandson Kahentaráken Snow-Patton holds a funnel. Water in the sap has floated to the top and frozen, a layer that is easily removed. The rest of the water will be removed by boiling.

Otsi’tsaken:ra (Charlie) Patton (right) pours sap into a container while his grandson Kahentaráken Snow-Patton holds a funnel. Water in the sap has floated to the top and frozen, a layer that is easily removed. The rest of the water will be removed by boiling.

Among these are members of the six Indigenous nations in the Haudenosaunee Confederacy, including the Kanien’keha:ka (Mohawk), whose territory stretches from the upper half of New York state into Quebec. A Faithkeeper with the Haudenosaunee Ronatháte ne Kanien’kehá:ka Kanonhsésne (Mohawk Trail Longhouse) near Montreal is Otsi’tsaken:ra (Charlie) Patton. He practices and shares his peoples’ traditional teachings of tribal traditions at the community longhouse, a gathering place for traditional meetings and ceremonies. “We call Wahta [maple] the leader of the trees because it is always the first tree to wake up in the spring, even when there is still two feet of snow on the ground,” Otsi’tsaken:ra said. “We have a ceremony of Enhatihsestáta to put the sap back in the tree, but only Creation has the power to do this. We burn tobacco to encourage the trees to fulfill their responsibility in the cycle of  life.”

Black, red and silver maple trees as well as box elder trees can be tapped for syrup, but the sugar maple (Acer saccharum) produces the largest amounts of sap with the greatest concentration of sugar. The tree is found in a region that is today known as the “Maple Belt,” hardwood deciduous forest that stretches from the Midwest through the Northeast United States and from the southeast corner of Manitoba to Nova Scotia in Canada. Maple syrups are classified according to their color, with the lightest syrups having a delicate taste and darker colors having a stronger flavor. To be “Grade A,” a syrup must reach from 66 to 68.9 on the Brix scale of sugar content.

Traditionally, Indigenous people have used maple syrup to cure meats, as a sweetener for bitter medicines and as an anesthetic. Maple sugar also contains nutritious minerals, including phosphorous, magnesium, potassium, iron and calcium. Maple syrup was also used as a trade item in the form of dried, portable sugar slabs.

After Europeans arrived in the 1600s, they learned from Indigenous people how to turn the sap into sweet and medicinal products. Otsi’tsaken:ra’s Kanien’kehá:ka community of Kahnawá:ke had been predominantly a Catholic settlement for generations until the longhouse traditions were restored in the 1920s. He said the connection with Wahta had been diminished to the point that some Kahnawa:ke people had to rely on French neighbors to provide enough maple sap to revive age-old ceremonies. They went to the Onondaga Nation (also within the Haudenosaunee Confederacy) and to Ohswékon (Six Nations Reserve) in Ontario to recall maple syrup songs and dances. “The young people went out to learn even more about our ceremonies,” Otsi’tsaken:ra said, and now, “It’s like someone has turned a switch.”

Maple sap (which is called “orontákeri” in the Mohawk language of Kanienʼkéha) only runs when the temperature rises above freezing in early spring, during what some tribes call the “sugar moon.” However, this is a potentially dangerous time to go into the woods. High winds can snap branches overhead, and people can become stranded in sudden snowstorms. “Spring is a time when everything is upside down and trying to find balance, so we ask the winds not to blow too hard so people will not get hurt and be able to return to their loved ones,” said Otsi’tsaken:ra.

Gathering the syrup began by hanging birch bark buckets in the tree below where they wanted to collect the sap. Above the bucket, they would “tap” the tree by drilling a hole and then placing a piece of wood in it to serve as a spout, or spile, from which the clear sap would drip.

Once the sap was collected, it was stored overnight in clay pots or, in more recent times, metal buckets. The lighter water in the sap would rise and freeze. In the morning, the ice would be skimmed off the top and the remaining water removed through boiling. This condensing will turn the liquid into a gold to brown color. About 40 gallons of sap are needed to produce about a gallon of syrup. Dried syrup would become sugar that could be stored in cone-shaped bark containers.

“When we have collected enough sap and return safely, that’s when we give thanks. This is how we fulfill our promise to the trees,” Otsi’tsaken:ra said. When Kanien’kehá:ka people celebrate Wahta, they gather in the longhouse and drink syrup from cups to express their personal gratitude for this sustaining gift from the Creator.

Many Indigenous nations in Canada and the United States now have maple syrup businesses, and Indigenous youth are once again learning how to make maple syrup and its associated ceremonies. The Kahnawa:ke community has held classes and given demonstrations at their annual maple syrup festival. Kimberly Kaniehténhawe Cross, an agent at Kahnawà:ke Tourism, said that during the last 10 years many families such as hers have taken the initiative to start their own “sugar shacks” where they can show others how to boil sap, and schools are now teaching about the maple syrup history and process. “My husband’s great uncle tapped the trees in the same forest we do,” Cross said. “So it just feels right and connects us to the past.”

Otsi’tsaken:ra is teaching his grandchildren the process and gives the syrup he makes to family and friends. He said he sees the resurgence of interest in maple syrup as a good sign his people are thriving. “Wahta trees are strong because they have roots,” Otsi’tsaken:ra said. “Native people stay strong in the same way, from our roots that reach back through our mothers and grandmothers, all the way back to the Iotsi’tsisen (Sky Woman) at the beginning of creation.”

Canada is now the largest producer of maple products in the world, exporting 75 percent of the world’s supply, with more than 90 percent coming from the province of Quebec. The Quebec Maple Syrup Producers reported that their province sold 180.2 million pounds of maple syrup in 2021, an increase of 22 percent over the previous year. Canadian exports of maple syrup rose by 20.7 percent to 160.78 million pounds that year. Demand for more from Canada might increase. Yet as a 2019 paper published in “Forest Ecology and Management” reported, this could become problematic because climate change is now driving the maple tree in its more southern U.S. ranges farther north.

Otsi’tsaken:ra said there are stories that recall how Mohawks learned to gather Wahta from animals at a time when the people had been living out of balance with the natural world. He said the ceremonies today recall the importance of taking care of the environment. “More than ever, we should learn to be spiritual people and learn from the ancestors to give thanks, and to put aside colonial thinking that tells us a dollar is worth more than a tree,” he said.