Video projections and lighting displays flash above the nightclub stage as the sound mashes electronica, house, techno, reggae and dubstep with powwow songs. Onstage, powwow dancers make an occasional appearance. This is a night with the DJ group A Tribe Called Red, a three-man First Nations crew performing as DJ Bear Witness, DJ NDN and DJ Shub. Their work is as creative and thought provoking as a piece of performance art. 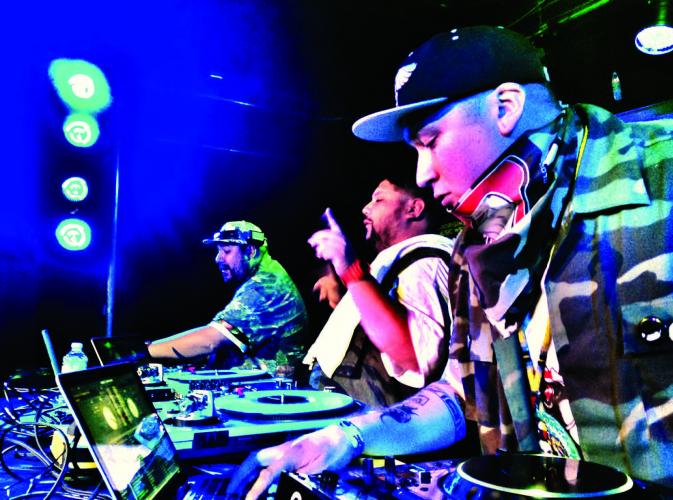 A Tribe Called Red during a live show. Photo by Nadya Kwandibens.

A Tribe Called Red during a live show. Photo by Nadya Kwandibens. 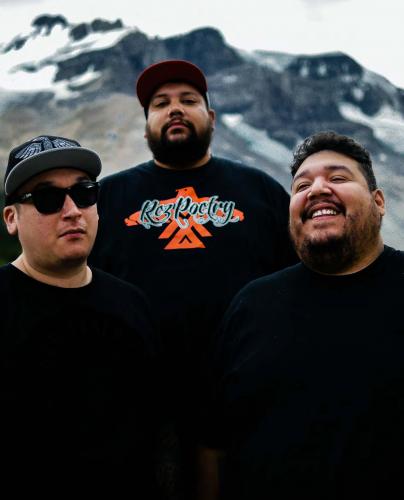 A Tribe Called Red on a road break at Jasper National Park in Alberta, Canada, during their 2013 tour. Photo courtesy fallingtreephotos.tumblr.com

A Tribe Called Red on a road break at Jasper National Park in Alberta, Canada, during their 2013 tour. Photo courtesy fallingtreephotos.tumblr.com

The group takes depictions of Native people from popular culture (film, television and other media) and plays them against powwow music and tribal songs. The result is a compelling dialogue between pop culture and the Native people it misrepresents. The Montreal Gazette has called A Tribe Called Red “the most exciting thing happening in Canadian electronic music right now – and, arguably, in Canadian music, period.”

In its short existence, A Tribe Called Red has found audiences thousands of miles from its home in Ottawa, touring in the UK, Germany, Greece and Mexico. It brings its “electric powwow” sound to the main contemporary music festivals. Its self-titled first album was downloaded 5,000 times in six days following its release last year. The Washington Post named it one of the top ten albums of 2012.

But even though the DJs came together to make danceable music, they are actively fighting misappropriation and misrepresentations of Native people. In the liner notes to their second album Nation II Nation, they declare, “the simple fact that we are here today is a political statement. As First Nations People, everything we do is political.”

A Tribe Called Red came to be in 2008 when Ehren “Bear Witness” Thomas, who is Cayuga from the Six Nations Reserve, met Ian Campeau (“DJ NDN”), an Ojibway from the Nipissing First Nations, while working at a nightclub in Ottawa. The pair invited two-time Canadian DMC (an annual, global DJ competition) Champion Dan General (“DJ Shub”), also Cayuga from Six Nations, to showcase at the club. In 2010, the trio took the name A Tribe Called Red and advertised the “Electric Pow Wow,” a monthly club night for Native talent.

Initially their sound was coined PowWowstep or a blend of powwow songs, electro and dubstep (a genre of electronic music with a spaced syncopated rhythm and a reverberating sub-bassline). Some people incorrectly associate the group’s name as homage to A Tribe Called Quest, the American hiphop group from Queens, NY. Actually, they drew their name from the phenomenon at powwows in which drum groups would call themselves by their nations, such as the drum group A Tribe Called Mi’kmaq.

Their shows counterpose their music to media clips containing egregious stereotypes of Native people. At the Evolve Music Festival in Nova Scotia, for instance, the group remixed “Electric Pow Wow Drum” with audio clips from the comedian Louis C.K. and a film by Quentin Tarantino. The song leads with the voice of Louis C.K. deriding “white people” for misnaming indigenous people as “Indians.” Audio follows from Tarantino’s World War II movie Inglourious Basterds in which Brad Pitt’s character, nicknamed “Apache,” announces that he has “a little Injun” in him. Pitt declares an “Apache resistance” attack against the Nazis and commands each of his soldiers to bring him “one hundred scalps.”

The educational effort continues in the videos produced by A Tribe Called Red. The song “Red Skin Girl” takes the round-dance song of that name by the drum group Northern Cree and blends it with dubstep and electronic beats. In the original version, Northern Cree celebrates Native women with the lyrics “beautiful smile, beautiful eyes…she’s so pretty, she’s so fine, red skin girl, I love you all the time.” Alongside those lyrics, A Tribe Called Red’s video plays film stereotypes of Native women such as the scene from Night at the Museum in which Sacagawea (played by a non-Native actress) blows kisses to Theodore Roosevelt (played by Robin Williams). The video exposes the manner in which Native women are portrayed on film – as promiscuous objects enticing white men.

Thomas explained to a reporter from ChicagoMusic.org that the videos unmask the “one-dimensional racist, stereotypical images and misrepresentations of Aboriginal people.” Through appropriating the media images for his use, Thomas is “dissecting them, deconstructing them and putting them back together into another story...[thereby,] indigenizing these representations.” Thomas is also a media artist. The Canada Council for the Arts selected him for the Aboriginal International Residency Exchange and sent his video installation, “The Only Good NDN (Indian),” to the 2010 Sydney Festival in Australia. Like his other work, A Tribe Called Red videos give Native people control of their images, freeing them from being seen “through the lens of the colonizers.”

Unexpectedly, A Tribe Called Red has also had to educate some of its non-Native fans.

The group noticed that some non-Natives in its audience were wearing face paint and faux Indian apparel and headdresses. The sight, said Campeau, felt like “being punched in the gut.” The group sent a Twitter message to their followers saying, “Non-Natives who come to our shows, please don’t wear headdresses or war paint. It’s making fun of our race and culture and is extremely insulting and demeaning. Please stop. Meegwetch and Nia:we.”

The message set off passionate conversations with fans and between fans explaining how Native people feel about the misappropriation of Native images. At the Tall Tree Music Festival on Vancouver Island, the organizers supported the group and posted a “no headdress” policy, even confiscating headdresses at the door. One Twitter message started a productive dialogue, and the headdress matter has ended.

But the educational work never ends. Three years ago, Campeau became involved in the mascot issue. His local youth football team used the name Nepean Redskins, imitating the Washington, D.C., professional football team. He protested the name and in September 2013 lodged a human rights complaint with the Ontario Human Rights Tribunal on behalf of his daughter. Campeau stated that the “r-word” is derogatory, similar to the “n-word” for blacks. By using that term, he said, the team was “legitimizing a racist term,” making it acceptable for someone to call his daughter that word. In September 2013, the team decided to change its name at the end of the season.

In addition to its touring, A Tribe Called Red is spreading its message through its recordings. Its first album was a collection of tracks composed after two years of showcasing in clubs. For the sophomore album Nation II Nation, the group completed a full studio production using recordings from drum groups Black Bear, Chippewa Travellers, Eastern Eagle, Northern Voice, Sheldon Sundown, Sitting Bear and Smoke Trail. The record label Tribal Spirit gave the crew access to its catalog of artists. In 2013, Nation II Nation was nominated for five Aboriginal Peoples Choice Music Awards and received four of them, Best Album, Best Group, Best Producer and Best Album Cover. The album made the short list for the Polaris Music Prize, a non-profit organization in Canada which “recognizes and markets albums of the highest artistic integrity, without regard to musical genre, professional affiliation or sales history” (The group’s first album made the Polaris long list in 2012.) A third album, which is a collaborative work with various Native musicians, is scheduled for release in fall 2014.

Besides powwow songs, the group has worked with traditional Haudenosaunee music. In 2011, Nolan Warden, the editor of Ethnomusicology Review, asked the group to collaborate on an audio project using archival wax cylinder recordings of Native music. Thomas and General were drawn to the Cayuga recordings from the Frank Speck collection at Indiana University’s Archives of Traditional Music. This collection included music recorded with the assistance of Cayuga chief Alexander General (Deskaheh), who might be an ancestor of General. The result is the track “General Generations,” marking the connection between Dan General and Alexander General.

A Tribe Called Red calls its work “active decolonization and indigenizing.” As Native people, they recognize their responsibility towards their families, communities and other indigenous people. Through seizing control of Native imagery and sounds, their music has taken Native issues to a global stage.