For thousands of years, people living in the region we now call Central America traversed near and distant lands to acquire food resources, conduct trade in materials such as jade and finely crafted pottery, and maintain social and political relations. The trails, paths and roads that facilitated these movements, and the villages and cities they connected, formed a dynamic pre-Columbian landscape whose complexity and vitality we have yet to fully understand. 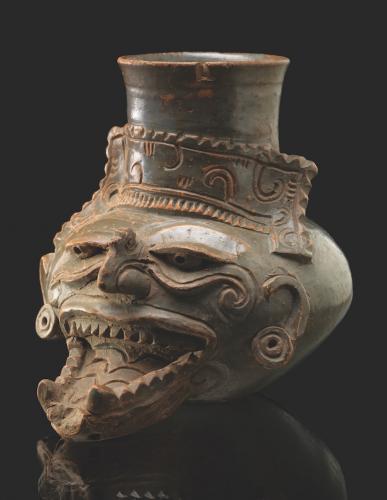 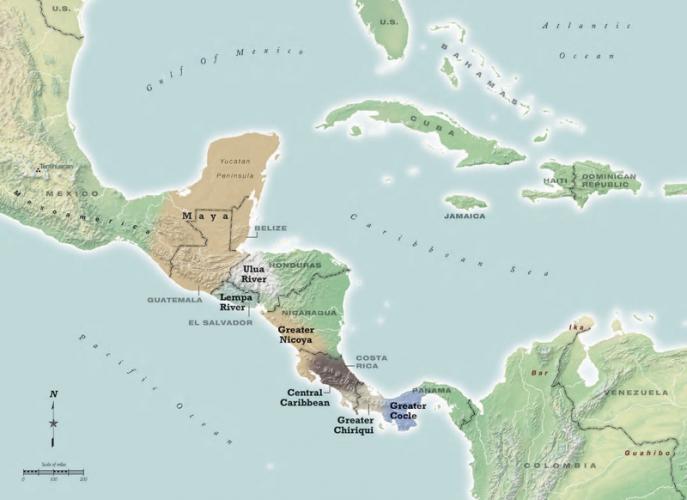 These human landscapes also embodied significant cultural meaning. Consider how pathways used to acquire natural resources may develop into routes for sacred pilgrimages. Regard how the repeated use of ancient paths in Costa Rica created deep sunken corridors that were later emulated in formal architecture to create impressive entrances to villages.

Current efforts to map and interpret these landscapes using aerial photography, satellite imagery and GPS technologies offer exciting new possibilities for understanding the past. But the richest evidence for tracing the movement and interactions of people in ancient Central America is still found in the distribution of pottery, stonework and other materials found at the ends and intersections of trails, paths and roads; namely, the cities and villages where people lived, worked and socialized.

This region, encompassing present-day Belize, Guatemala, Honduras, El Salvador, Nicaragua, Costa Rica and Panama, is the focus of a major new National Museum of the American Indian exhibit Ceramica de los Ancestros, drawing on the Museum’s collection of 17,000 ancient ceramics, more than 10,000 of them intact. In collaboration with the Smithsonian Latino Center, it explores the vibrant but lesser-known cultures such as the Nicoya, Ulua and Cocle that flourished in Central America more than a millennium ago.

The presence of status-enhancing jadeite objects as far south as Costa Rica provide evidence that paths and roads once moved highly valuable materials mined from the Motagua Valley in Guatemala. Deity imagery on pottery recovered from villages like Santa Isabel, Nicaragua, in the Greater Nicoya culture region, suggest a long-distance, albeit unclear, connection with Mesoamerican populations sometime before AD 1000. Gold pendants uncovered in central Panama are so similar to objects found in Colombia that archaeologists are convinced the knowledge for gold-working traveled north from South America. The variety of other material items that clearly flowed in abundance along ancient trails, paths and roads between 1000 BC and the early 16th century help us visualize a human landscape teeming with activity and meaning.

Obtaining materials to build homes, transporting food for consumption or exchange and social visits were as important to ancient Central Americans as they are to us today. Acquiring objects that signified wealth and social status also preoccupied ancient elites who may have been village leaders, chiefs, nobles or even kings. These needs and desires meant that everything from foods to gifts to valuable gold and jadeite jewelry moved across the regional landscape. Perishables such as foods and highly valued quetzal-bird feathers do not often survive to the present, but weather and time-resistant stone and ceramic objects are common in the debris of ancient villages.

Cultures from Central Mexico south to Costa Rica were captivated by the lustrous green jadeite stone that is believed to have come from a single source in the Motagua Valley of Guatemala, near the Honduras border. The ancient Olmec who thrived along the Gulf Coast of Mexico between 1500 BC and 400 BC first mined the stone and created remarkable figurines, masks and ear ornaments. Around the same time, the Maya, in present-day Belize and Guatemala, created beads and plaques (or pendants) with images of leaders and deities. The latter were owned by members of the Mayan elite and demonstrated extreme wealth. In both the Olmec and Maya worlds, jadeite objects also functioned as dedicatory offerings associated with public buildings and spaces. As such they were tied to ritual practices.

By around 300 BC, people in northern Costa Rica were importing jadeite by way of coastal routes along the Atlantic, bypassing Honduras and Nicaragua. These early “Costa Ricans” engraved jadeite pendants called Axe Gods and invented a string-saw jade carving technique that allowed them to produce intricate pendants with imagery of deities or spiritual beings. Many of these carvings were meant to be worn, but they were also interred with the deceased.

Pottery, elaborated in different colors and with different iconography, also circulated among the various peoples of ancient Central America. Plumbate ware, easily distinguished by its vitrified gray-colored surface, circulated widely from its production center near the Mexico–Guatemala border between AD 600 and AD 1200. It was the preferred pottery of the powerful Toltec state in Central Mexico. Elaborate carved vessels representing animal, human and deity forms have been recovered throughout Mesoamerica, and in Central America as far south as Panama. The Museum collections include plumbate ware from Guatemala, El Salvador, Honduras and Costa Rica. Many of these objects are of the later, more elaborate, Tohil variety of plumbate ware, which was produced between AD 900 and AD 1200. Several vessels depict the Mesoamerican “Old Man” deity who may have been a household deity connected to hearths and fire. His presence south of the Mesoamerican region suggests that religious iconography and ideas were also moving along the network of roads leading to communities in Central America.

Natural disasters, political tensions or perhaps population pressures occasionally compelled groups and even entire communities to search for new lands to settle. These migrations can be difficult to identify, but the ideas and objects they took with them may provide clues about who made the journey and when it occurred.

The Greater Nicoya region, bridging modern-day Costa Rica and Nicaragua, experienced a tremendous influx of new residents between AD 600 and AD 900. Ethnohistoric accounts describe the migration of Mesoamerican Chorotega and Nicarao communities to Greater Nicoya during this period. At villages like Santa Isabel, located on the fringes of Lake Nicaragua along the southern Pacific coast, the evidence is clear that non-locals were arriving and bringing with them unique pottery styles, figurine styles, mortuary practices and even Mexican religious practices that focused on the wind god Ehecatl and the Feathered Serpent god.

The evidence from Santa Isabel demonstrates that these same communities did not, however, plant maize, or consume dog or turkey as food staples. Nor did they use Mesoamerican style ritual incense burners. This perplexing scenario has lead scholars working at Santa Isabel to suggest that perhaps these migrations were made by communities coming from intermediate regions in El Salvador and Honduras. What they brought with them were ways of doing things that were partly local and partly Mesoamerican. And as do all migrating communities, they adapted to local customs and resources once they settled at Santa Isabel.

Ancient pathways moved people, objects and ideas across considerable expanses of Central America where boundaries and borders were probably less prohibitive than they are today. While territories were certainly marked and defended, the need to acquire key non-local resources and maintain social obligations meant that travel was likely not restricted, even during periods of conflict. Cross-boundary movements were frequent and ordinary in the pre-Columbian past. The examples provided here offer evidence that these routes were important for connecting diverse communities in Central America to each other and to regions north and south. Perhaps continued research on the corridors of travel, the trails, paths and roads will someday enlighten us about the nature and meaning of these journeys as well.