From the Shadows of History: Taino at the Vatican

In a cleaning of frescoes at the Vatican, from the clouding dust of centuries, emerge naked figures – five, maybe six men. Amidst horses and helmeted soldiers, wearing feathered headdresses, the men seem to dance. One man, naked, leg raised in movement, faces out prominently; another one, seen from behind, buttocks bare, bends a knee forward, right arm raised, perhaps holding a feather, as if in dance. 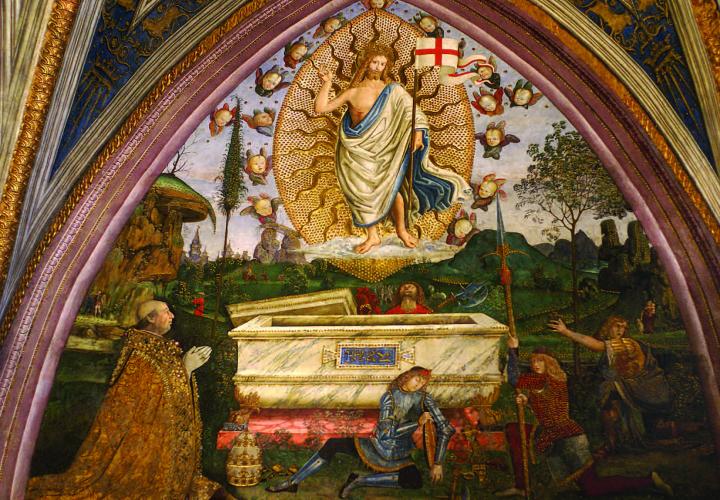 Bernardino di Betto (Pinturiccho) (1454-1513) Resurrection of the Christ, 1492-94. Fresco in Borgia Apartments, the Vatican. Image courtesy of the Vatican Museum

Bernardino di Betto (Pinturiccho) (1454-1513) Resurrection of the Christ, 1492-94. Fresco in Borgia Apartments, the Vatican. Image courtesy of the Vatican Museum 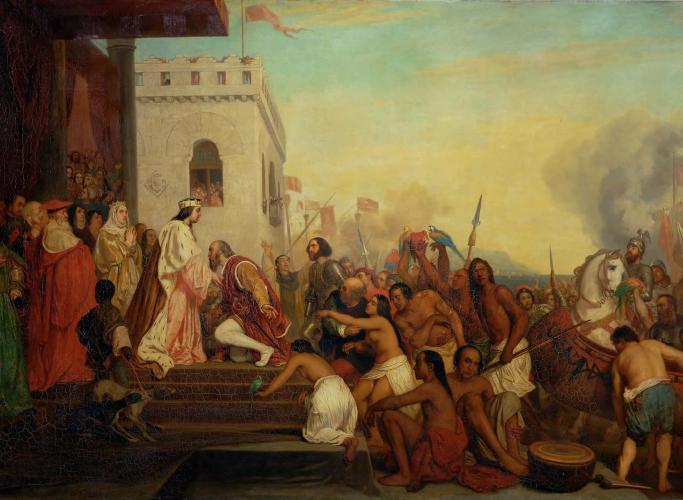 Joseph-Nicolas Robert-Fleury (1797-1890). The reception of Christopher Columbus by King Ferdinand II and Queen Isabel of Spain in Barcelona, 1847. Musee du Grand-Palais, Paris. Robert-Fleury’s depiction of the presentation of the Taino captives shows some striking similarities to the Vatican fresco, especially the presence of Spanish soldiers on horseback. Photo by lessingimages.com

Joseph-Nicolas Robert-Fleury (1797-1890). The reception of Christopher Columbus by King Ferdinand II and Queen Isabel of Spain in Barcelona, 1847. Musee du Grand-Palais, Paris. Robert-Fleury’s depiction of the presentation of the Taino captives shows some striking similarities to the Vatican fresco, especially the presence of Spanish soldiers on horseback. Photo by lessingimages.com 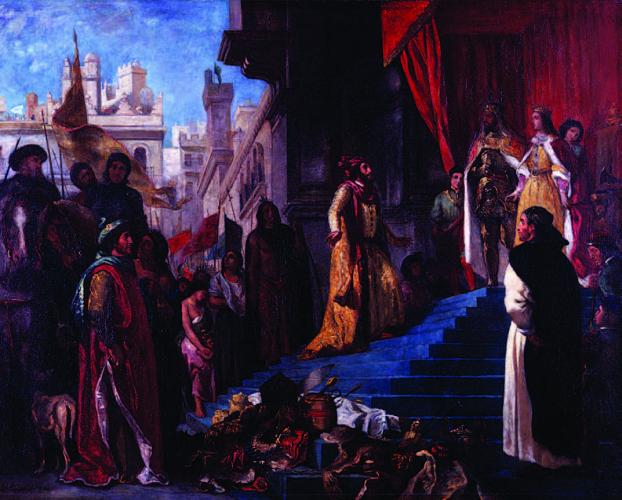 Authorities at the Vatican, perplexed at first, have surmised over seven years since this drawing began to emerge that the figures represent American Indians – specifically the Arawak-speaking Caribbean island people, Taino – who greeted Christopher Columbus. The Vatican authorities also announced their conclusion that these are indeed the first images drawn of American Indians in Europe. Perhaps it is so. We can, with some certainty, even give a name to one of the figures, Diego Colon, the adopted Taino son of Columbus, the central figure in my historical novel Taino (Fulcrum, 2012) and a constant presence to me over several years of writing.

The scene is but a sketch, almost ghostly, etched in a small space of the large fresco called Resurrection of the Christ by Renaissance painter Bernardino di Betto (Pinturicchio). The Vatican fresco is located in the Apartamento Borgia, the space once occupied by Pope Alexander VI, Rodrigo, the “Borgia Pope,” as his name indicates, from the prominent Spanish family whose reign at the Vatican was one of paramount intrigue, corruption and mayhem. Pinturicchio, the “little painter,” worked on the monumental fresco – an artistic act intended to celebrate the sanctity of the Borgia Pope – starting in 1492 and finished at the end of 1494. The decoration of the Pope’s quarters was in active execution as news of Columbus’ “descubrimiento” spread rapidly throughout Europe.

Antonio Paolucci, Vatican Museums director, associates the newly revealed fresco figures with “the Indians” described by Columbus – most obviously in drafts of his First Letter to the Spanish Monarchs, written during his return voyage and posted to the Spanish Court and his other investors immediately upon his Iberian landfall in mid-March 1493. Not only the letters, but also legendary public ceremonies celebrating Columbus’ triumphal return provided visual representations of Caribbean Indigenous people for European imaginations. The Taino captives he brought back with him – estimated initially at 10 but reduced by disease to six – were put on display at these events along with his other curiosities.

Paolucci makes a strong argument that by mid-1493, in Rome, Pope Alexander VI must have had access to Columbus’ Letter and thus had read the descriptions of “the Indians” he had ostensibly encountered, suggesting the prototype for the recovered figures in the Resurrection fresco. This is a respectable scenario explaining that the images are in fact of those first Taino captives – invented curiosities of the first contact, but who, as we shall see, achieved some early historical identity and gained their place in legendary narrative.

The return of Columbus from his first voyage and the news of his “discovery” had massive dissemination throughout European countries. A marvel of calculated self-promotion, Columbus’ first letter to the Spanish sovereigns (actual title, Letter of Columbus, on the islands of India beyond the Ganges recently discovered) contained a genial narrative for the emergent Renaissance. In fortuitous timing, the world-changing story rode the newly established power of the printing press – thus the Letter was republished widely and quickly, over 50 times, in more than a dozen European capitals.

By mid-1493, a poem praising Columbus’ deed based on the Letter was being recited and sung in street corners of Rome and Florence. No doubt, the momentous news was fully noted in Vatican discussions. The Columbus missive spoke of fabulous potential for wealth, major gains to be made in gold, natural resources and cheap indigenous labor. The promise was of power to set in motion a major colonization of lands, peoples and goods without measure. In the language of the church, this was a grand opportunity for “harvesting souls” via the evangelization of whole new peoples.

A major scene, quickly legendary, was publicly enacted at Barcelona on May 15, 1493: the Spanish monarchs, King Fernando of Aragon and Queen Isabel of Castilla, grandly feasted the returning hero Admiral. The whole city attended, and many foreign dignitaries and potential new investors spread word of the momentous occasion. The six captive Tainos brought to Spain by Columbus were prominently featured and a young man from Guanahani, the first island claimed by Columbus, caught the queen’s eye. Columbus would adopt the Taino adolescent, and he would become known to history as Diego Colon, the adopted son and interpreter for the Admiral in his second voyage. (Diego or “Dieguillo” is the first-person narrator of my novel Taino.)

The Pope, particularly the geo-politically ambitious Borgia, was immediately deep in the thicket created by the news from Spain. Two major powers, Portugal and Spain, nearly at war over claims of colonial discovery, first in Africa and now in the “Orbo Novo,” or “New World,” required a theological and political framework to define their increasingly global dispute. In the very rooms of the Apartamento Borgia, perhaps even as Pinturicchio and his underlings were painting the now famous fresco, the Borgia Pope, Alexander VI, settled the question. He issued Inter caetera, his Papal bull of 1493, which, in a sequence of such papal bulls, once again reclaimed the “pagan” world for Christian dominion. It divided the bulk of the “New World” – partly for Portugal and mostly for Spain. Alexander’s bull would become the basis for the 1494 Treaty of Tordesillas, which further detailed the division of the world for Christian nations. The thinking inherent in the treaty gave rise to the infamous Doctrine of Discovery, the legal construct that justified the dispossession of American Indigenous nations by European powers.

The scene of dancing Tainos is depicted in but a small frame within the huge topic of the Christian Resurrection. Painted in white, colorless in a sea of color, “the Indians” are framed behind the right shoulder of a Roman soldier and the edge of his red tunic. The soldier gazes up in astonishment at the rising body of Jesus. The Borgia Pope himself appears kneeling in prayer at the left side of the mural, observing not only the resurrected body of Jesus, but also the dancing figures. It makes sense; in the waning of his own papal influence, Alexander VI is instrumental in the division of this new world – either paradise or inferno – from which come these strange, certainly distinct, new human beings. Revealed during his pontificate, the grand “discovery” of a “new world” and a new type of human being, generated the immediate question: Who are these new people? What do they represent?

Columbus had written, in the Letter: “…they are so guileless and so generous with all that they possess, that no one would believe it who has not seen it. They refuse nothing that they possess, if it be asked of them; on the contrary, they invite any one to share it and display as much love as if they would give their hearts…”

Dismissing the expectation that these characteristics denote lesser intelligence, Columbus adds, “to the contrary…they are…of a very acute intelligence and they are men who navigate all those seas, so that it is amazing how good an account they give of everything…”

Columbus did not hesitate, however, in “capturing…Indians,” and would from the onset consider their peaceful nature an asset toward their potential enslavement. He was likely referring to the specific people later depicted in the Borgia fresco when he wrote, “in the first island…I took some of the natives by force, in order that they might learn and might give me information of whatever there is in these parts.”

Alexander VI died in 1503, just as a Spanish governor friar, Nicolas de Ovando, was hanging the Taino queen Anacaona and burning ni-taino caciques by the dozen-plus-one, to signify Jesus and the twelve apostles. With the Pope’s death, the rooms of the Borgia Apartamento were closed untouched for nearly 400 years, shunned because of his bad reputation. Only late in the 20th century was restoration work fully engaged. As a people, the Taino, too, were relegated to the obscurity of declared extinction, shut behind closed doors by subsequent histories of the Caribbean.

From the group of mostly unidentified captive dancers in the Borgia apartment, we have one with clear, variously documented name and narrative – Diego Colon, Lucayan Taino interpreter from the Bahamian cays northeast of Cuba, specifically Guanahani, the first island sighted by Columbus. Diego would become the Admiral’s adopted Taino son, and his primary interpreter during the second voyage and other explorations. A good list of writers, including this one, have touched or been touched by this character from documented history who was transitional and dialectical at the Taino’s principal historical moment, at the pivotal beginning of the modern world. He is a historical character and dream-mind with whom I once shared long writing evenings over several years working on my novel.

One important witness in the novel is Father Bartolome de las Casas, the historical “defender of the Indians,” whose chronicle, History of the Indies, led me to find Diego Colon’s final trails. Las Casas, the “good friar,” was the most vigorous lifelong advocate for the humanity of American Indians in all colonial history.

The Indian Diego – I like to think he is perhaps the one facing front, or the one holding the feather – lived to the 1530s in a convent in Santo Domingo, where las Casas places him, and where the mind’s eye of my novel finds him, an old man full of the memory of his momentous times and, in the novel at least, also full of admonitions to the coming generations of his people who even today, after centuries of ghostly absence and much like the dancers at the Vatican, make a reappearance, a Caribbean Indigenous resurgence, in this new era, this post-modern world.

José Barreiro, Smithsonian Scholar Emeritus, is a member of the Taíno Nation of the Antilles. He is co-curator of the NMAI exhibition, “Taino: Native Heritage and Identity in the Caribbean.”