In the foothills of southern Mexico’s Sierra Juárez mountains, a tradition has kept a community alive for generations. The Zapotec weavers of Teotitlán del Valle, a village of about 6,500 people just outside of the city now known as Oaxaca, have been crafting their unique woven rugs and other textiles for centuries. One weaver, Porfirio Gutierrez, has returned to his ancestral home to find that these ancient skills are in danger. He is now defending this tradition against the same market and cultural forces that lured him away as a young man more than two decades earlier. 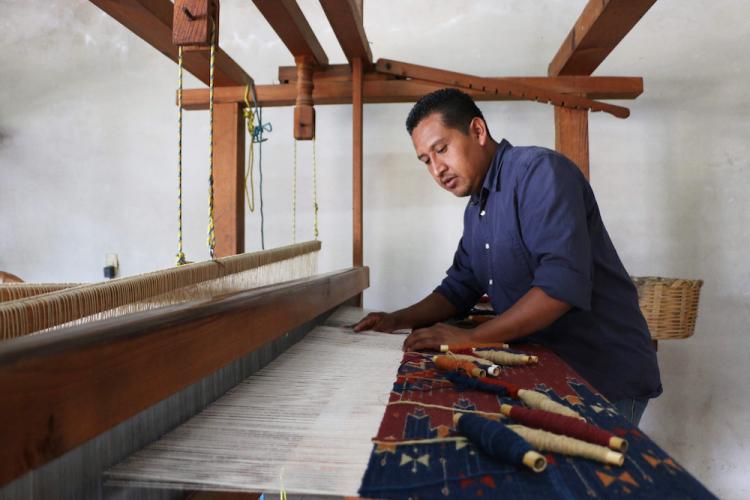 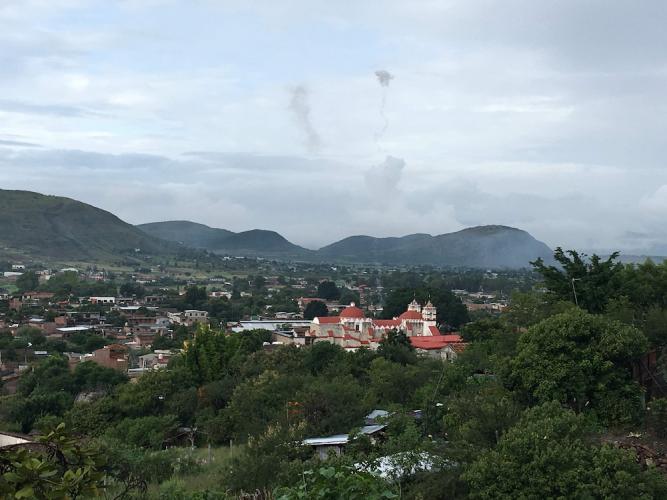 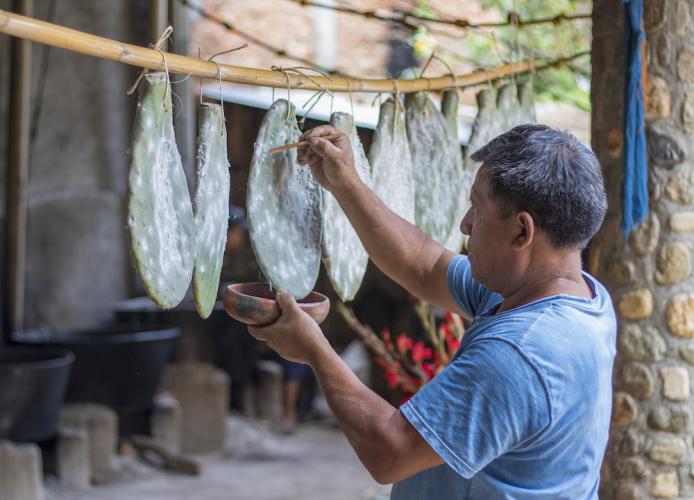 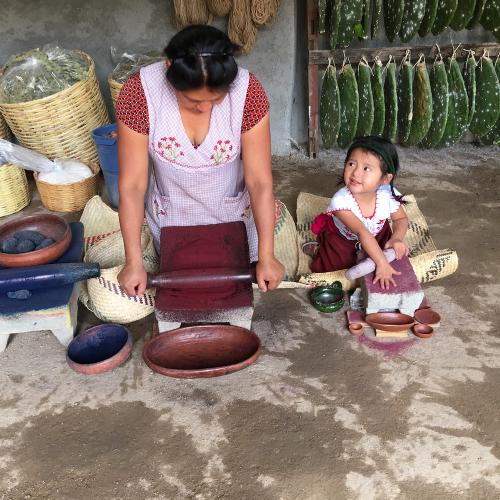 Juana Gutierrez teaches her granddaughter, Marialuisa, how to grind dried cochineal insects on a metate. Photo by Alana Coghlan.

Juana Gutierrez teaches her granddaughter, Marialuisa, how to grind dried cochineal insects on a metate. Photo by Alana Coghlan. 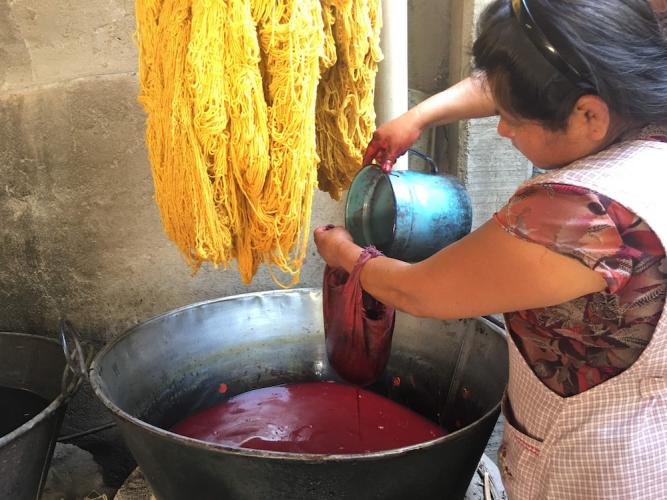 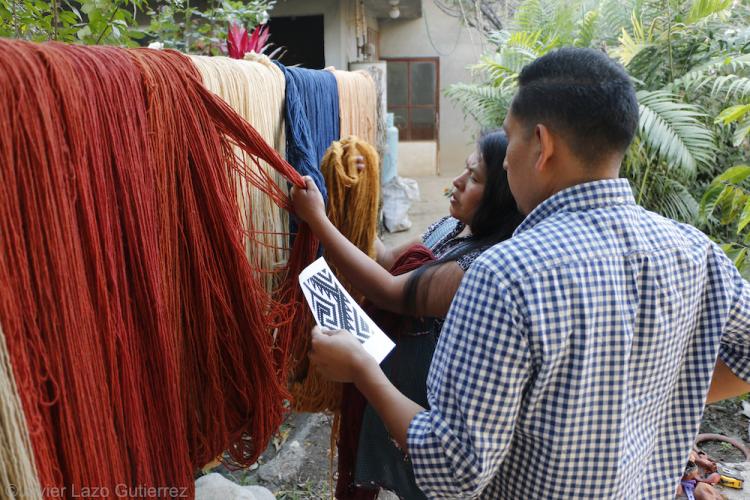 Gutierrez and his sister, Juana, discuss possible colors and design for a new tapestry. Photo by Javier Lazo Gutierrez.

Gutierrez and his sister, Juana, discuss possible colors and design for a new tapestry. Photo by Javier Lazo Gutierrez. 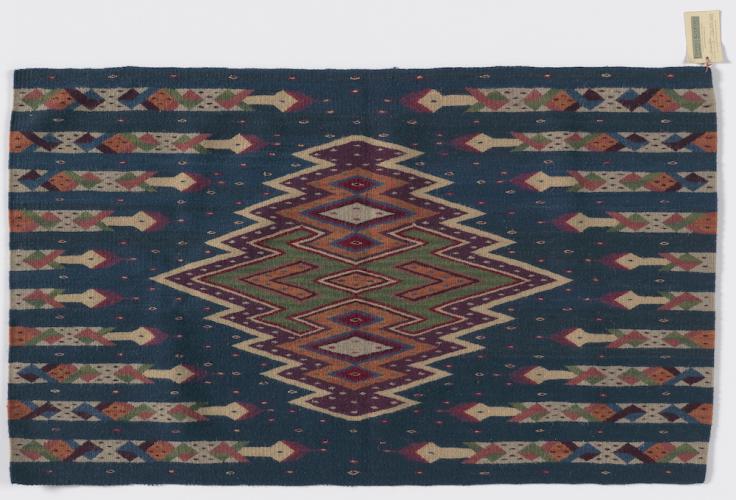 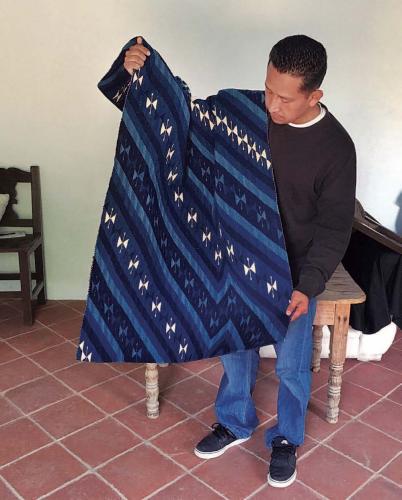 Gutierrez displays a newly made tapestry from the studio. Photo by Alana Coghlan.

Gutierrez displays a newly made tapestry from the studio. Photo by Alana Coghlan.

The Zapotec weavings of Teotitlán del Valle have been treasured near and far. At least 500 years ago, the Aztecs exacted tribute from this community in the form of elaborate plant fiber textiles. Originally the textiles were woven with various plant fibers using “backstrap” looms, which are tied to a wall on one end and extend around the back of the weaver on the other. Yet after the Spanish conquest, the invaders introduced wool and freestanding looms. Traditionally, most fibers, both plant and animal, were dyed with a variety of natural dyes made from plants and insects.

By the early 20th century, chemical dyes prevailed. They were easier to use and created colors that were more vibrant. However, chemicals used in the textile industry can contain toxic substances such as arsenic, lead and mercury, and they can have detrimental impacts on the environment, including polluting water sources. Textile wastewater can include not only the dyes but also other pollutants, including organics, nutrients, salts, sulfur compounds and toxicants. These wastewaters enter the environment as runoff after the dying process.

By the 1970s, as the global economy reached Teotitlán del Valle, the village’s weavers began creating hand-woven rugs primarily sold through intermediaries to the North American market. These wool rugs were often tailored to American tastes, evoking styles of the Southwest by using traditional Zapotec or Navajo designs. These textiles were colored almost entirely with chemical dyes.

Gutierrez grew up in Teotitlán del Valle, where textile weaving occupied almost every member of the community – including most members of his family. He learned to weave when he was a 12-year-old child but readily admits that he harbored no passion for it or other Zapotec cultural traditions. “I was never aware of what I was part of until I left,” he says. Like many local youngsters, he had been bombarded by Western media, colonial history and contemporary Mexican culture. He was given the impression that his Indigenous culture was stagnant and that prosperity could not emerge from tradition. The allure of economic prosperity induced Gutierrez to look for employment in the United States. In 1997, the then 18-year-old Gutierrez moved to Ventura, Calif., where he worked in a cement factory and as a restaurant manager. He would go on to start his own family and didn’t look back for almost 10 years.

When Gutierrez did finally return to his home village to visit his relatives in 2006, he discovered he had a new appreciation for his Zapotec culture – its language, dance, music, food, ceremonies and especially its weaving artistry. In his absence his sister, Juana, who is nine years older, had been learning the practice from their parents and other community elders and reviving the village’s natural dying techniques. She was even conducting her own dying experiments with new plants to increase the range of natural colors used on both wool and plant fibers. All of this work inspired Gutierrez to resume the family trade in an attempt to revive the traditional Zapotec methods of weaving.

But he also recognized the threats to this ancient tradition. Gutierrez says, “It’s not the consumers that have to deal with pollution in their water from chemical dyes” but rather his own community. He also worries about the potential impacts of climate change on his village. Gutierrez says that the people who will bear the greatest brunt of climate change are the Indigenous people who grow their own crops. “When my father was young, he says that the rainy season started in March and ended in September and the rivers always had water. Now we don’t get much rain and the rivers are dry.” This past year, his father’s corn crop failed from lack of water. In addition, Gutierrez buys his indigo for dye from a Zapotec farmer in Santiago Niltepec, Oaxaca. He says, “Last year the farmer got 50 percent of his normal harvest because there was very little rain. If there is no rain due to climate change, I have no blue for my weaving.”

Other external forces were hampering his family’s success. “My family never had the opportunity to sell their weaving directly to clients. Instead they would sell them to the people who had access to the market, so their talent was never acknowledged.” These intermediaries dictated the price, weaving design, size and what dyes were to be used – which were mostly chemical based. This market took only a small amount of the family’s natural-dye weaving, which the family created primarily for its own use. Gutierrez decided to help his family retain its economic and artistic autonomy. “I began to be deeply concerned about this situation. At the same time it inspired me to contribute to the preservation.”

Although Gutierrez’s father and sister were excellent weavers, neither had attended school and both lacked the means to promote the family’s work. Ironically, it was Gutierrez’s understanding of economics and international markets and his fluency in English – all of which he acquired in the United States – that enabled him and his family to take over their own artistic and economic destiny.

“We came together, Juana’s family, our parents and a few of our siblings and decided that our legacy must survive and it was absolutely important for the young generations in our community to know that there is something much more important than money.” In 2007 they gradually started setting up their home as Porfirio Gutierrez y Familia Studio and promoting it as a place where people could visit and see how the wool was spun, died naturally and woven into finished textiles. Perhaps most importantly they were selling their work directly to consumers. They no longer were at the mercy of the intermediaries; they could express themselves through their art. The studio now employs 21 of Gutierrez’s relatives, who produce a variety of traditional weavings and new designs, all with natural dyes.

Visitors can watch as he and his family work as a team to craft the textiles by hand. Each worker is skilled in a specific task that is integral to weaving and rug making. Juana does all the dyeing. She has created more than 200 distinct colors from natural dyes, but the dyes themselves require considerable labor. Many colors come from seasonal wild plants such as pericon (Mexican marigold) or fruits such as pomegranate and sapote, which must be gathered from the countryside every year. Once that supply is exhausted, it cannot be replenished, and there might not be more until the plants can be harvested again the following year. Just like her ancestors, in order to get rich red and crimson hues, Juana uses the parasitic cochineal insects that feed on prickly pear cacti. The cacti are harvested and the cochineal is then removed, dried and ground on a metate – a slightly concave stone – into a fine powder that Juana can combine with water and mineral salts to create the dyes.

Other family members might do less-technical designs, gather materials and groom pieces depending on their availability. Gutierrez as well as his brother, brother-in-law and nephew take care of some of the most technical designs and weaving, but he stresses that the individual skills of the entire family are integral to the creation of each piece. “My niece who finishes, who tucks in all the ends of my pieces, who takes a needle and tucks back the fringes, that is an art in itself. … You have to keep the tension correctly to make it so when you look at the piece, you don’t know the fringes were ever there.” Because each piece of weaving takes so much time to create from scratch, many members of the family are needed to contribute to the project.

The family’s reputation has extended well beyond its studio. Its customers are primarily Americans visiting Teotitlán del Valle and those Gutierrez sells to at art markets across the United States. In 2015, Gutierrez was accepted into the Artist Leadership Program of the Smithsonian National Museum of the American Indian. Designed to give Indigenous artists access to the Museum’s collections, the program allowed them to learn from their culture’s past and pass that knowledge on to their present-day communities. Gutierrez was able to observe plant-fiber weavings and traditional natural dying techniques. He also noted that chemical dyes had been employed by Zapotec artists as early as the turn of the 20th century. Upon completing the program, he and Juana conducted a workshop to pass that knowledge on to other members of the Teotitlán community. “We’re beginning to see more and more people adopting authentic natural dyed weaving. This is the result of much effort, not only from our studio but also from a few other families in our pueblo who are also committed to preserving our legacy, such as Fausto Contreras and Mariano Sosa. We now see a few families joining us, and it makes us hopeful for the future of our pueblo, our people and our way of life.”

Gutierrez has continued to work not only as a weaver but also as an educator of other weavers in his village and of customers. He uses every available opportunity to advocate for the benefits of natural dyes and Zapotec traditions. But his life is not without complications. He splits his time between Oaxaca and California. And while he has one foot planted firmly in the traditions of his ancestral community, inspired by his family and Zapotec heritage, he has the other foot in American culture and commerce. His colleague, Navajo painter and fellow lover of textiles Tony Abeyta, can relate. Both men live in California and travel back to their homelands, struggling to make their way as contemporary artists while maintaining their cultural traditions. “We shared a common passion for wool, natural dyes and the aesthetics of weaving,” says Abeyta. But they also understand “how each culture struggles with their own identity in the commercial marketplace and how challenging it is to keep true to our own unique right to just create art without being labeled or marginalized as pure commercial craft or just folk art.”

Even so, Gutierrez says the two parts of his life can no longer be separated. Without the knowledge he gained in California, his family’s studio would not exist, and without his Zapotec heritage, he would be culturally eviscerated. “The whole time I was in here [in California], and when I first started to reconnect with my culture, I felt like there was something missing,” he says. “At this point in my life I feel complete because I feel like I have contributed to this world.”