The famous tradition of Chitimacha basket-weaving deeply influences the contemporary artist Sarah Sense, even though she works mainly in two dimensions, not three. Instead of basketry, she constructs mixed media pieces from photographs overlaid with weaving materials and ancestral designs. 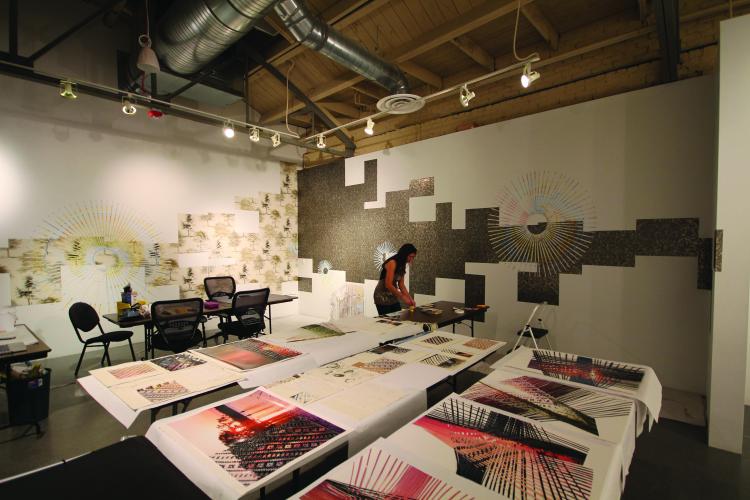 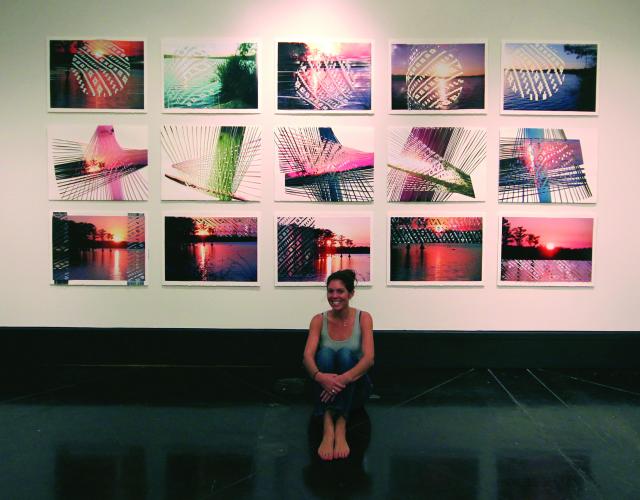 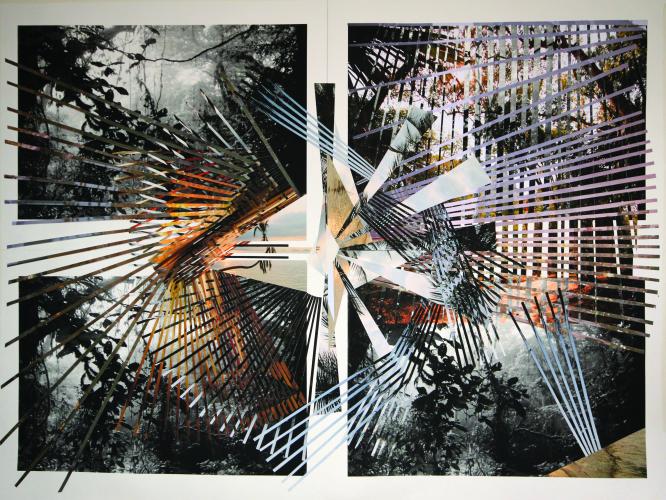 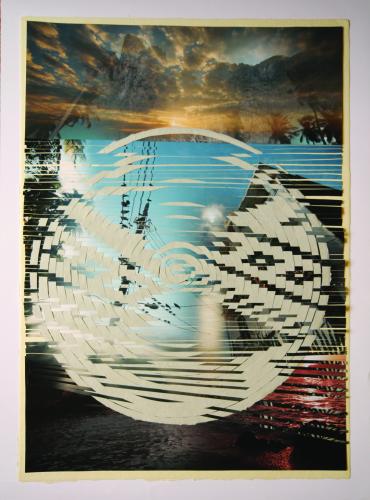 The California-raised Sense sees her art as a return to her family tradition and her Louisiana tribal community. “I was pulled in this direction,” she says. “This was something I knew I was supposed to do.”

Even while growing up in California, Sense was deeply aware of the basketry of her Chitimacha grandfather’s relatives. Also important to Sense was that her Choctaw grandmother Laverne Blanche Jones maintained an extensive basket collection, which included Chitimacha and Choctaw baskets, and an extensive international collection from her travels around the world. Sense was clearly inspired immensely by this basket collection and her grandmother’s fearless traveling.

At the age of 18, Sense was drawn directly into the tribal tradition. The Chitimacha cultural department in Louisiana asked her to research the Chitimacha basket collection at the Southwest Museum of the American Indian in Los Angeles. Her work recovered tribal patterns unknown by the current generation of weavers on the reservation or the cultural department, who were happily surprised with the findings. “This was my first significant experience with the Chitimacha baskets,” Sense says.

When she was 19, she returned to the reservation with her sister, Rachel, and designed activities for the youth during the summer months. As she became more involved in her community, her interest in Chitimacha basket-weaving traditions grew, even while she pursued her mainstream education in California. She received her BFA from California State University, Chico and moved to New York City to take her MFA at Parsons the New School for Design.

In graduate school in New York, Sense embarked on further research about Chitimacha culture and basket-weaving. In 2004, she went to the then chairman of the Chitimacha Nation, Alton D. LeBlanc, to ask permission to continue the weaving tradition with non-traditional materials. “It was the most sacred thing for me at that moment. The most important thing for me was that I was incredibly respectful of other basket weavers. I felt very moved to do this, and I wanted to do it in a careful and considerate way,” Sense says.

She then came to the idea of weaving a photograph that she had taken of the reservation. It was her way, she says, of becoming “reacquainted to a family or community that I had been separated from through different family discourses. It was this whole discourse of realization and recognition. This was my way of ‘weaving’ myself back into the community.”

Sense combined mixed media with her photographs, using mylar, found objects, bamboo paper and other materials to weave the patterns of “raven’s eye” and “rabbit’s foot” in her pieces. She began with photos she had taken of the Chitimacha reservation landscapes. Her work has grown to incorporate many different places and lands over considerable amounts of time and space.

During 2011, Sense embarked on one of her largest projects to date – a book chronicling her journey from Canada to Chile in which she interviewed Native artists in a variety of towns and cities. The result was Weaving the Americas: A Search for Native Art in the Western Hemisphere (Pascoe, 2012). Her experimentation with contrasting art forms and artistic application, she said, led her to “question art forms, purpose, community and the trajectory of learning a practice.”

Throughout her trip, Sense became intimately aware of her own understanding of art forms and their instruction. As she was traveling and visiting communities, she did so by physically being on the land, not by flying there, but by using buses, boats, taxis or car hires.

“I was really becoming engaged with the landscape. I didn’t think about it that way at first. Meeting with an artist or artisan and discussing the history of the art they’re practicing, all came back to the land. That’s the most powerful part of the whole journey. I never felt separated from the land. I felt connected in a way where I let myself be connected.”

As she was journaling her experiences, Sense realized that she had been documenting the position of the sun or moon depending on whether it was day or night. “It suddenly had this whole new relevance to me,” she said. While engaging with the land, Sense was then able to engage in the place where she is. This brings to mind Keith H. Basso’s discussion in Wisdom Sits in Places: Landscape and Language Among the Western Apache of his concept of “sense of place”:

Hence, as numerous writers have noted, places possess a marked capacity for triggering acts of self-reflection, inspiring thoughts about who one presently is, or memories of who one used to be, or musings on who one might become… Place-based thoughts about the self lead commonly to thoughts of other things – other places, other people, other times, whole networks of associations that ramify unaccountably within the expanding spheres of awareness that they themselves engender. The experience of sensing places, then, is thus both thoroughly reciprocal and incorrigibly dynamic.

Through her understanding of places and their importance, Sense is able to recognize the multiple layers of meaning they engender. For her, these places also express narratives significant to her Chitimacha heritage as well her connection to artists throughout the world.

Weaving Water: The Next Chapter

After Weaving the Americas, Sense was interested in examining Chitimacha territory and the idea of the migration of culture through trading, movement of people and water, specifically in the area around the Gulf and Mexico and the Caribbean. Her series Weaving Water continued that exploration. While Sense was working on this series, she learned from Dr. Max Carocci of the British Museum that her Chitimacha ancestors had been enslaved and taken from Louisiana to the Caribbean. She had gone to Guadeloupe to do work and realized later that the island was a grave to distant relatives who had been enslaved there. The pieces that followed reflected upon the use of water in its many ways – forced and voluntary migration, trade, subsistence.

Exploring its many functions brought Sense to the following statement in the Weaving Water catalogue, “…despite the cluttered clash, people can return to a source to bring them back to the ground, returning them to a home that maybe can only be felt inside, because perhaps home has been removed.”

Sense further tied her basketry experience and heritage together while visiting Thailand. While her tour guide was making a basket using the patterns from his culture in the northern part of the country, Sense began weaving her first Chitimacha basket. She used bamboo, a relative of river cane, the material used by the Chitimacha. “It was one of these amazing moments; I’ve never used these materials before and I was in Thailand making my first Chitimacha basket!”

She then went to see Mr. Supan of Lampang, Thailand to study his paper-making process. She decided to create her Weaving Water series on his bamboo paper. The entire journey had a powerful impact, bringing her to weave her experiences intimately in her pieces, expressing new conversations from seemingly different parts of the world.

Coming Full Circle and Looking to the Future

In May 2013, Sense was invited to a weavers’ circle during the annual New Orleans Jazz and Heritage Festival including the traditional Chitimacha weavers John Paul Darden and Scarlett Darden. After finishing Weaving the Americas, she was wrapping up the Weaving Water series, and returned to Louisiana for this event. “It was a very full-circle moment for me,” Sense says. After transversing three continents, she had returned to one of her homes to weave photographs with the traditional basket weavers.

Sense recognizes both the personal and communal importance of belonging by examining her own history of migration as well as that of her Chitimacha ancestry. Her pieces make both social and political statements on the movement of cultures throughout time and space. They combine contemporary materials, such as the recent photographs, with long-standing Chitimacha patterns and, at times, bamboo paper. Merging the considerable histories of Chitimacha patterns and other materials, Sense demonstrates her contemplation of the continuing conceptions of identity over time. Weaving her patterns both loosely and tightly, one can reflect upon these complex perceptions and understandings of memories, histories and places.