Life on the Art Market Trail

The pace is beginning to wear on Shan Goshorn (Eastern Band of Cherokee). Over the last four years, she has shown her unique basketry at markets at the Heard Museum in Phoenix in March, the Red Earth Festival in Oklahoma City in June, Santa Fe in August and the Cherokee Art Market in Oklahoma in October. 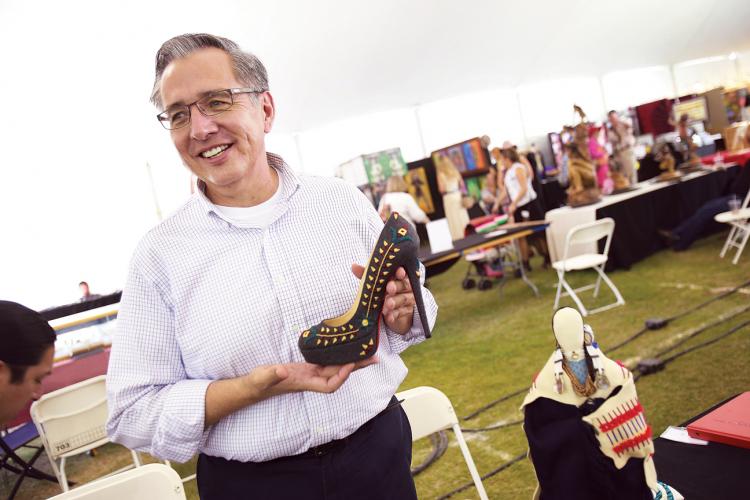 Goshorn is one of hundreds of Indian artists on the Art Market trail, travelling from city to city to show their work at major gatherings.

Participation is a lot of work for the artists. To get her booth ready, says Goshorn, “I have to set up at 5:15 in the morning.

I have had people come up with flashlights to look at what I have while unpacking.”

One year at Santa Fe, she was in one of the last booths at a street’s end. “I had all kinds of people show up and they would be huffin’ and puffin’ by the time they got to my booth. They were like ‘I can’t believe how far out you are. Well, let’s see what you got.’”

Goshorn plans to cut back to two or three markets per year. When her work sells out at markets and shows, she returns to Tulsa, Okla., her home for more than 30 years, to replenish her inventory. It takes six months to create the fine art form of Cherokee basketry she interweaves with photographic applications.

But she will not part with Sante Fe. “I don’t want to give up that spot because they are highly coveted. That’s the big one – that’s the market people from all over the world come to,” she says. With hundreds of booths for a thousand or so artists, the week leading up to Santa Fe, she says, is “like a homecoming for Indians.”

The Santa Fe Art Market, one of the oldest and most famous, attracts about 1,100 Indigenous artists from more than 100 tribes in the U.S. and Canada. The American Indian Arts Marketplace at the Autry National Center of the American West in California will draw 200 artists from 40 tribes. The Northern Plains Indian Art Market in Sioux Falls, S.D., is slightly more particular about its entrants. An artist must be an enrolled member of the tribes the market recognizes as indigenous to the U.S. and Canada Northern Plains. If the Santa Fe Indian Market is one of the oldest, looking forward to its hundredth birthday in 2022, one of the youngest is the Indigenous Fine Arts Market, inaugurated in 2014 in Santa Fe.

The Heard Museum Guild Indian Fair & Market in Phoenix, Ariz., shows the range of activities. This year, said senior communications manager Debra Krol (Xolon Salinan Tribe), it featured “A seven-acre campus, 600 artists, close to 100 cultural performers and several hundred staff and volunteers with an audience of about 15,000.” A highlight was the honouring of basketry artists, introducing basket weavers and basket makers in the center of the Heard’s plaza.

(Krol refers to the Heard market as “the Fair” or “the Heard” or the “Indian Fair” to distinguish it from the Santa Fe market. “We don’t want people to confuse us,” she said. )

Art markets benefit Indigenous artists, the art world and the cities that host them. The Santa Fe economy gets a $120 million boost every August, not through the art, but from the hotels and restaurants that support the audience of more than 150,000 art lovers, collectors and gallery owners.

Not every exhibitor follows the whole grueling trail. In November, Ray Tracey (Navajo), silversmith, will set up a booth at the American Indian Arts Marketplace at the Autry National Center of the American West in Los Angeles, Cal. He loves Los Angeles because it’s not far from his home in Window Rock, Ariz., and he lived there for about 10 years. A former actor, he appeared in TV shows such as Hart to Hart and Lou Grant.

In the ’90s, he attended Santa Fe Indian Market, one of the oldest and most famous, but stopped going when he developed two Ray Tracey galleries in the city. Later, he sold the galleries and now deals solely with Sorrel Sky Gallery in Santa Fe.

Another well known artist, the glass-worker Preston Singletary, also shows his work through galleries, but times his visits to coincide with the nearby art markets. Singletary (Tlingit) comes all the way from Seattle, Wash., to show glassworks at Blue Rain Gallery during the Santa Fe market and the Heard Museum Guild Indian Fair & Market in Phoenix, Ariz. Market, he said, is “a very cool and functional event and works really well for a lot of the artists but galleries represent me on an ongoing basis.”

For artists at the market, a key problem is to attract attention amid the crowd. Before showing at any Indian market, Goshorn wondered, “How the heck can you get a following with 1,200 artists? How do they even find you? Well, I’ll tell you how. Win a prize. You win a ribbon and people will find you.”

Many of the markets are juried with artists vying for awards and prize money. Categories range from contemporary fine art to traditional arts. First prize at Santa Fe paid three dollars in the 1940s; today all prize monies there total $100,000.

The Autry adds an artwork every year to its permanent collections with the Jackie Autry Purchase Award. A juried competition selects awards in 13 categories.

During the Northern Plains juried art show at September’s end, entries compete for Best of Show, Best of Fine Arts and Best of Tribal Arts awards.

The Prescott Indian Art Market in Prescott, Ariz., takes a different approach. “Some shows rely on collectors, gallery owners and academics as overseers. At the Prescott Indian Art Market, however, we rely on Native artists themselves to police and recognize extraordinary talent. Not unlike the Screen Actors Guild that recognizes excellence within their craft, the experienced jurists can see the greatest potential in Native American artists and art,” says director Sandra Lynch, curator of anthropology at the Sharlot Hall Museum.

“To be able to put ‘Indian’ on the Prescott Indian Art Market label, all potential exhibitors must conform to the 1990s Indian Arts & Crafts Act, which requires enrollment or certification from a federal or state-recognized tribal nation. That’s what genuine means,” says Lynch.

The markets are constantly innovating, adding new categories and events. “Last year, we started something new, a fashion show,” said Krol, senior communications manager at the Heard. “On Friday night, we will have a fashion show during the ‘Best Of’ reception. Models will stroll about the campus on Saturday. We call it the Fashion Walk.”

Just like any other Indian market, preparations start the day after the last one ends. The year-long frenzy comes to a head in March when the campus turns into giant fair market grounds.

As indigenous artists with different motives and experiences crisscross the U.S. following Indian art markets to showcase their work, Goshorn summarizes their goal, “I want my work to be seen.

The Eiteljorg Museum of American Indians and Western Art

Downtown Santa Fe – On the Plaza

National Museum of the
American Indian