NATIVE FASHION DESIGNER PATRICIA MICHAELS (Taos Pueblo) was already well known in the Southwest when the invitation came that made her a national TV celebrity. 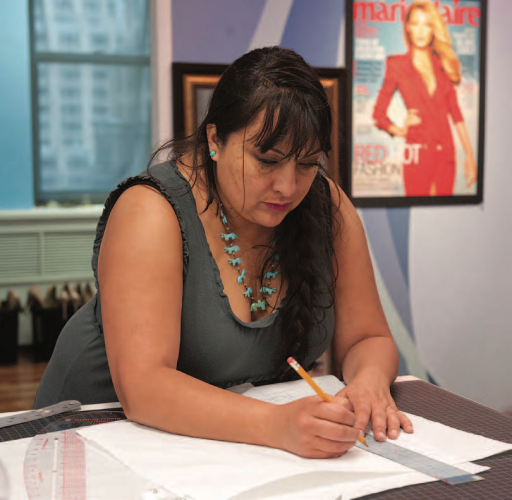 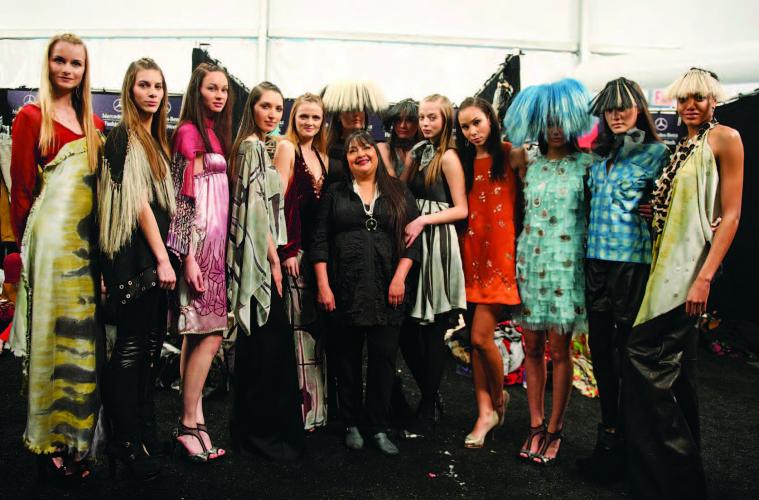 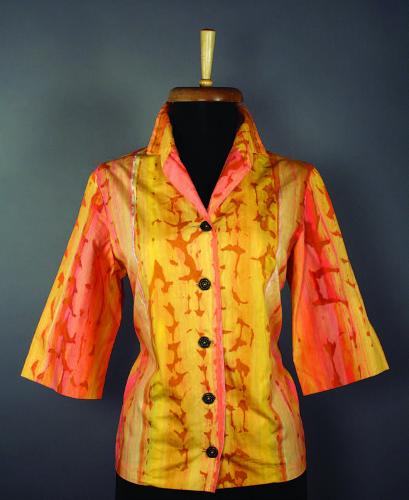 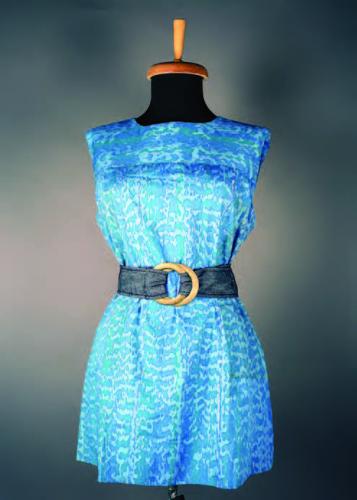 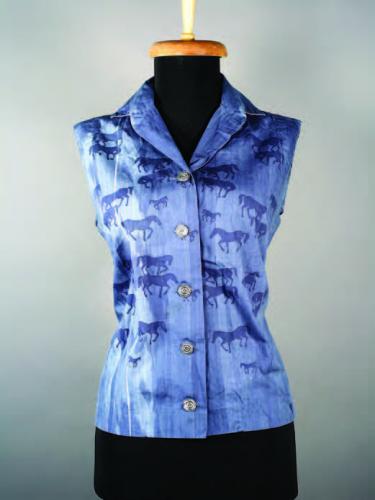 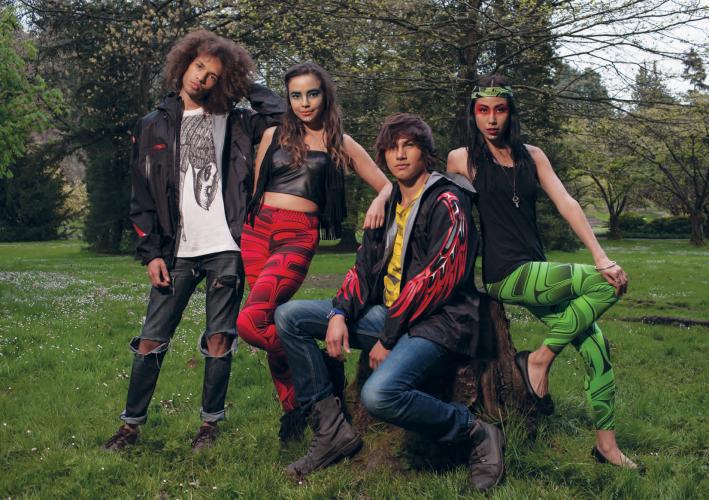 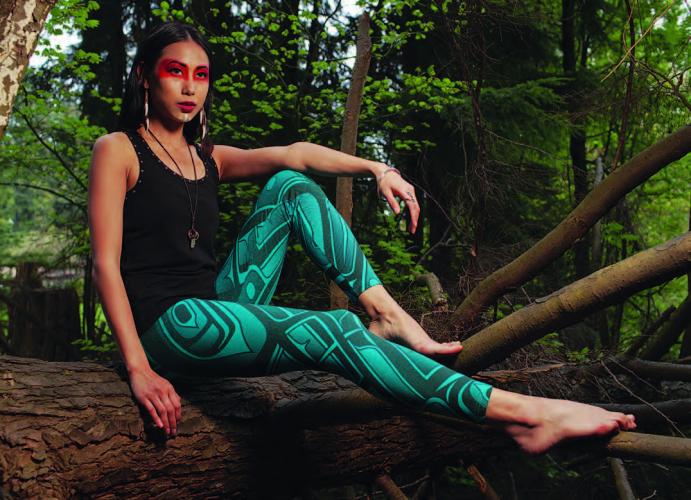 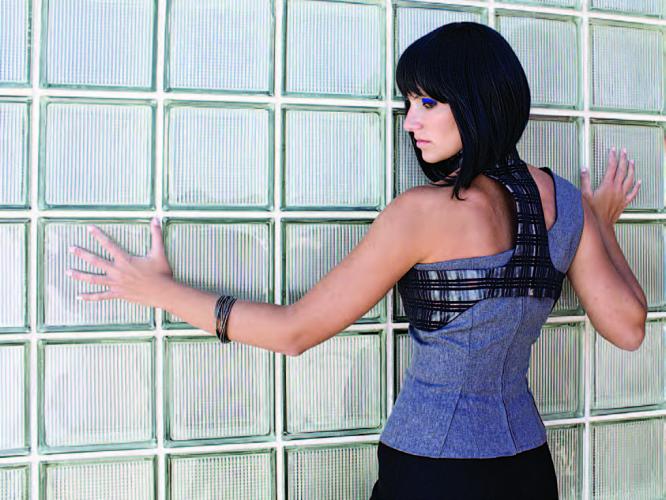 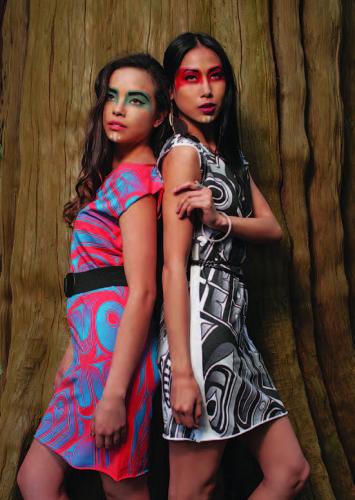 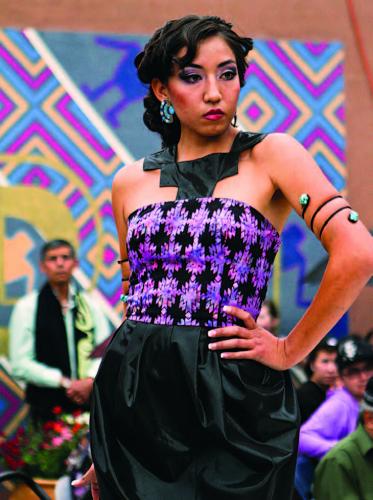 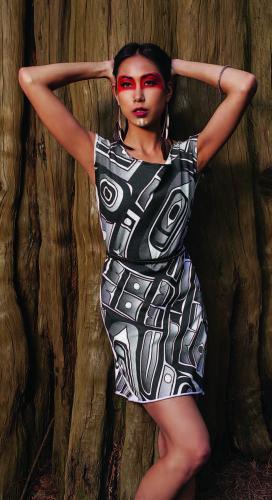 Her listing on a website for booking fashion models brought her to the attention of the producers of the influential cable TV competition Project Runway. In its recently completed 11th season, the show invited Michaels to be its first contestant of American Indian descent. Surviving week after week in the often-catty competition, Michaels frequently drew the judges’ praise for producing “something we’ve never seen before.” One other contestant complained that for host Heidi Klum, the famed model and entrepreneur, Michaels “could do no wrong.”

In the final episode, timed for New York’s Fashion Week, Michaels startled the runway audience with a blue dress covered, elk-tooth fashion, with handcrafted mica pendants and an undulating head piece whose filaments veiled the model’s face. Judge Zac Posen, the noted designer, called it “techno powwow.” In the end Michaels came within a horsehair of winning, a showing that in itself became a rallying cry for Indian fashion.

Michaels’ performance was a revelation for a national audience deeply ignorant about contemporary Native fashion. As Michaels noted, mainstream fashion thought “that a roach meant a cockroach.” But she was working within a 70-year tradition of famed Indian designers bringing a Native vision, without compromise, to the commercial mainstream. She follows the trail of the major figures Lloyd Kiva New and Wendy Ponca, and her current generation is blossoming with new talents.

Michaels grew up near Canyon Road in Santa Fe, N.M. She visited the art galleries there while attending parochial school and became inspired by the paintings. She struggled in her studies because of dyslexia but excelled in her creativity and artistic abilities. She found a way to be a part of scholastic success by drawing or painting beautiful borders around the container where her fellow classmates’ golden star papers would go on the chalkboard. She changed it every month. “Everyone loved it! I found a way to be up there,” she said. She is proud to be “a person who would change things around when I couldn’t be a part of it from the beginning.”

She studied design at the Institute of American Indian Arts in Santa Fe, which then had a flourishing program in fashion design. She then followed the example of her mentor Lloyd Kiva New and enrolled in the Chicago Art Institute.

Her textile designing flourished and, four years ago, she set up a company, PM Waterlily LLC. The label combines her initials and her native name Waterlily. She explains that the plant, “was a medicinal trade pre-Columbus. Our trade routes went down into Mexico all the way to Canada. People would come to our village to trade. Unfortunately, we don’t know how we used it as a medicine. No medicine man or woman is around to know how it was used. My name itself has taught me to realize our voice has been muffled, because it hasn’t been our voice for so long.”

Although creating a label seems like the most logical step to take, she said, it took a while “to stumble your way in that direction.”

“There weren’t a lot of examples of ‘how to’ or a source I could look to for tools on what helps you earn your space in the competitive fashion industry. On the other hand, everyone else is ready to tell you how to design Native attire, and yet they’re not Native nor are they designing professionally.

“Misrepresentation by non-Natives in itself, has to change. An authentic voice has to be the standard. We have to embrace what’s in our hearts and ‘own it’ in order for all of us to move forward as a people.”

In recovering this voice and bringing it to the modern fashion world, Michaels is taking a course that might have startled her television viewers. But it has forerunners like Lloyd Kiva New and Wendy Ponca. The Institute of American Indian Arts (IAIA) recently honored their contribution in an exhibit now available online: iaia.edu/museum/exhibitions/online/

THIS JOURNEY BEGAN IN THE 1940s, with the work of Lloyd Henri New, professionally known as Lloyd “Kiva” New. Beginning in 1941, New, of Cherokee and Scotch-Irish descent, taught at the Phoenix Indian School. Later, from 1946 to 1957, he established the Kiva Center in Scottsdale, Ariz., where he began a successful business career as an entrepreneur, drawing on his skills in fashion design, property development and fabric manufacturing. He is perhaps best known as the first art director of the IAIA in 1961. He became the Institute’s second president in 1967, a post he held until his first retirement in 1978.

As an important leader on many non-profit arts and museum advisory boards, he contributed to institutions such as the Indian Arts and Crafts Board. He helped develop the Smithsonian’s George Gustav Heye Center in New York, the National Museum of the American Indian in Washington, D.C., and the Plains Indian Museum in Wyoming.

New became famous in the 1950s as the first Indian to show at an international fashion show. He created the first Native fashion label, employing up to 15 assistants in a collaborative fashion house following the European model. His “Kiva bags” sold in national department stores. Even First Lady Eleanor Roosevelt wore his designs!

His story will become even better known to scholars in coming years. The archives at the IAIA has recently opened his papers to the public.

New’s tradition at the IAIA carried on through Kimberly “Wendy” Ponca (Osage), a high school student there during New’s last years. She returned to the IAIA in 1982 as a traditional techniques instructor and transformed the course into an important fashion design program. She encouraged her students to combine new materials with traditional stories. She invoked the legacy of Spider Woman, who taught weaving to Native peoples.

Ponca helped found a fashion collective called Native Uprising, which brought a fresh and, in the words of the IAIA, “rebellious” perspective to the Santa Fe scene. According to the IAIA, the work of this group compelled the Southwestern Association for Indian Arts to add new categories to the Santa Fe Indian Market competition.

This energy found a new forum in 2009 with the blog Beyond Buckskin. Designed and inspired by Dr. Jessica Metcalfe (Turtle Mountain Chippewa), it began as a space to introduce Native designers and their work and to educate viewers on the importance of indigenous design and aesthetic. Says Metcalfe, “It’s really about creating our own space and pushing forward. Artists are our culture-bearers – the ones who carry our cultures to the next generation. We should be promoting and supporting them.” She added the Beyond Buckskin Boutique in May 2012, to provide a place where people could shop for clothing and jewelry created by many of these designers.

One person to benefit from this energy was Patricia Michaels.

In 2010, Michaels was the first winner of the Indian Market’s Textiles classification to use a contemporary design. This breakthrough, competing against traditional Native textiles, came by unanimous vote. It was heralded as the onset of “a new Native chic.”

This Native chic reached the national scene this spring via Project Runway. As one of the last three designer-contestants to present her collection at Mercedes-Benz Fashion Week 2013 in New York, Michaels addressed the audience in her native language Tiwa and wowed viewers with a varied collection, the likes of which had not been seen before.

Her finale look featured 150 micaceous piettes and 1,200 silver piettes. Mica is an important resource to the Taos Pueblo people, known for its use in pottery and architecture. “I wanted to use something significant about the beauty of Taos Pueblo,” said Michaels. “I chose to use mica and create these huge piettes.” She made them in her stepfather’s unheated blacksmith shop in the cold of December in Santa Fe. Each piece started with a length of wire rod wrapped around a pipe. Then the circles were cut and soldered. Next, they were pounded, buffed and polished. Michaels then shaped the mica to each form and drilled a hole in them. Finally, she had 20 people to help sew them onto the dress. The remaining piettes were finished by her associate Shaunte Bernal.

“We’re a very proud nation, and I wanted to show how we use our natural resources,” she said. “It’s our moment to shine. I wanted to talk about Native Americans from the perspective of being a Native American. I know that Fashion Week in New York is about ready-to-wear. I just felt that I wasn’t going to have somebody tell me how to create in my own country.”

Michaels says her inspiration during the show came from trees – more specifically, the energy of trees. During a difficult time in her life, she says, a friend took her to the highest part of the mountains in Taos to hug a tree. “I just felt the tree’s energy and I started to picture how the roots are all grounded; they intertwine and stay connected no matter how the weather changes. Those trees stay really strong, tall and old – reaching up to the sky, and they’re dancing with their leaves. I felt all that energy and strength.” She wished everyone could have this healing moment, to work toward staying as grounded in one’s life as a tree.

Metcalfe remarks, “Patricia is so conceptual, and she is thinking deeply about it. The work is not a literal interpretation because it’s not supposed to be. It’s deeper than any possible stereotypical fringe that may be used.”

Metcalfe sees Michaels’ success on the show as a significant moment. “Native designers now see their possibilities. ‘Success in this industry can be accomplished, and I can do this,’ is now said by many. It is really changing how we position ourselves, how we see ourselves and our possibilities.”