Kay WalkingStick has always been enthralled with the beauty of the landscape. 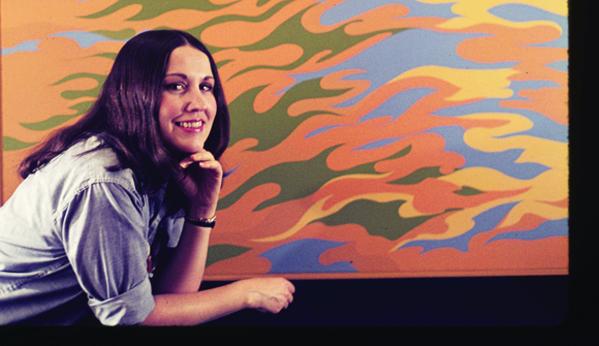 Kay WalkingStick with Hudson Reflection, I, October 1972. Courtesy of the Artist, Photo by Micael Echols

Kay WalkingStick with Hudson Reflection, I, October 1972. Courtesy of the Artist, Photo by Micael Echols 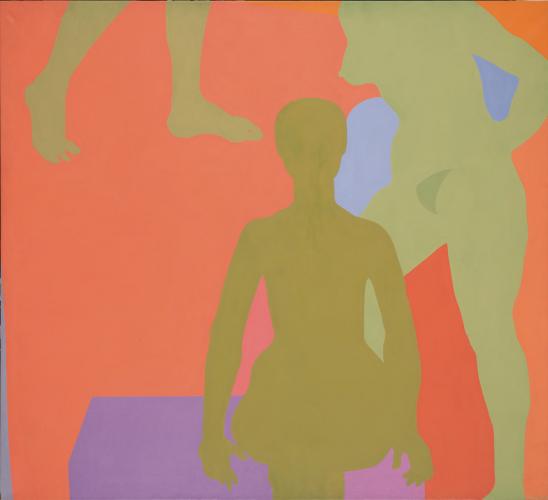 Sitting last May along the edge of the Ramapo River, in northern New Jersey, a place brimming with activity as tiny insects leaped across the surface of the water and thick foliage bristled in the summer breeze, WalkingStick silently studied the scene as she sketched.

The retrospective Kay WalkingStick: An American Artist, which opens this fall at the National Museum of the American Indian in Washington, D.C., will be a major milestone in this Cherokee artist’s career. It will provide a detailed visual history of her life’s work, from the early 1970s onward. It may come as a surprise to some visitors that WalkingStick’s paintings have ranged from edgy, playful, candy-colored nudes, such as Me and My Neon Box (1971) to dramatic abstractions which pay homage to American Indian historical figures, such as Sakajeweha: Leader of Men (1976). However, in a career spanning almost five decades, it is the landscape that calls to her again and again.

Early in her career, while she balanced the challenge of raising a young family in northern New Jersey with pursuing opportunities in the buzzing art world of New York City, her representational imagery focused on color and form, including numerous nudes depicted in silhouette, and also elegant, lightly whimsical depictions of the Hudson River and a cloud-filled sky. In 1973, WalkingStick decided to pursue her MFA at Pratt Institute in New York City and turned wholly to abstraction, both as a formal exploration of geometry and as a means to express deeper meaning about Native history and leaders. Though she had always taken her Cherokee identity for granted, during this time Native people were becoming more and more visible within the national media, leading her to use her art to more closely examine her relationship to a larger American Indian identity.

Sakajeweha: Leader of Men (see page 53), is an iconic example of WalkingStick’s work from this period. The surface is covered with an acrylic and a cold wax emulsion, giving the green paint a cartographic texture of subtle ridges and valleys. The arc, a shape that repeats in this painting four times, was a focus of her work throughout the 1970s and early 1980s. Some primitivist readings suggested that the arcs in her work “danced” or referenced the “bow.” In other cases feminist writers saw the shapes as renditions of the female anatomy. It is obvious that at a time rife with political protest these ideas could easily be associated with the artist and her work. For the artist, the arc was a geometrical form, a segment of a circle.

Whether they are meditative, pictographic or feminist, these ambiguous shapes provoke inquiry. Rich colors and bold hard-edged forms attract the viewer while the title ignites intrigue about the story of Sakajeweha, Chief Joseph, John Ridge and other key figures in American history. WalkingStick’s paintings were an overt attempt to come to terms with a history that was forgotten or ignored.

After a decade of abstraction, the pivotal experience of living in the Rocky Mountains while a resident artist at Fort Lewis College in Durango, Colo., led the artist to reconsider her abandonment of the landscape. Even as a young girl she was enraptured with the beauty of the valleys and hills near her childhood home in Syracuse, N.Y., longing to capture it through painting. By the mid-1980s this passion led to the creation of the work for which she is best known, her iconic two-paneled paintings (or diptychs) which combined abstraction and representational landscape painting. For example, in the diptych Night (1991), the left panel is dominated by an oval and circle form floating across a blue gradient background. The right panel depicts a stony landscape with the craggy remnants of a cliff in monochromatic blues, greys and bright white. Deep crater-like gouges mark the surface as meteors would mark the earth.

WalkingStick embraced the diptych format because it allowed her to combine her love of landscape traditions with her interest in addressing more complex and abstract ideas. The artist’s intention was not for the viewer to appreciate each panel separately but to read them together as one concept or as a multi-layered idea. She has at times explained this division as representing two kinds of memory, one momentary and specific, the other timeless and nonspecific, in order to create a deeper and more complete wholeness. Her interest in exploring broad metaphysical themes is evident in the painting Night which includes copper in the abstract shape, a material that references an elemental connection to the environment. For WalkingStick it is also about “turning paint, mere earth and oil, into a message, one that speaks to us in a visual language.”

Driven by her interest in universal themes, WalkingStick began to look more closely at the relationship between Native people and the land. Her consideration of terrestrial beauty and the sublime led her to investigate the deep connections and resonance of historical events in particular locations, seeking deep knowledge through careful contemplation. Her paintings began to combine landscape with the designs of the Native people who inhabited or are connected to those places. For the Wallowa Mountains in Oregon, for example, she used Nez Perce parfleche designs as inspiration. As artist Robert Houle (Saulteaux) has aptly stated, “her landscapes are a living synthesis of human presence and place.”

The painting Farewell to the Smokies (2007) demonstrates this synthesis between an intense sense of ancestral presence and place. Although WalkingStick was very familiar with the story of the 19th-century forced removal of the Cherokee people from their eastern homelands to Indian Territory in Oklahoma, she never thought it would be the subject of her art. Yet upon visiting the Great Smokey Mountains in North Carolina she found herself overtaken by the contrast between the intense beauty and lushness of the mountains with the tragic expulsion of her ancestors. To capture this, she spread a breathtaking view of the mountains across both panels, one in hues of burnt umber and the other in radiant greens. Closer examination of this majestic vista reveals a line of Cherokee exiles depicted in silhouette traversing the bottom of the composition. They walk from left to right, ending their journey in a black miasma, representing both the loss of their homeland and their uncertain future.

More recently her diptych paintings have also evolved into more unified compositions. New Mexico Desert (2011), a focus of her retrospective and a recent acquisition by the Museum, is a luminous oil painting on wood panel. Based on the landscape south of Chimayo, N.M., she depicts a dramatic view of soothing desert land beneath a cloud-filled sky. The surface is bathed in a morning glow rendered in brilliant golden tones that gives a calming effect. Across the right panel a Navajo textile design floats above the landscape and is impressed upon it. The design is not a precise copy; the colors have been altered to bright turquoise and a reddish-brown that references other Navajo artistic traditions such as jewelry but also makes the colors pop within the composition.

The Navajo design indicates what is both known and unknown, visible and invisible within this land. For most Americans the landscapes or the places we call home are often not recognized as Native places even though there is currently a large population of indigenous people within the United States. WalkingStick celebrates the natural beauty of the environment, as many American artists have, but also makes sure we do not forget that this land has a much deeper story, a history that is often hidden.

Kay WalkingStick’s love of the land and passion for painting has led to a rich and rewarding career. Now 80 years old, she continues to seek knowledge and understanding through her art. She still seeks inspiration from the land, whether traveling in the high desert of New Mexico, driving through the Dolomites of northern Italy or sitting at the side of the Ramapo River.

Kathleen Ash-Milby (Navajo) is an associate curator at the National Museum of the American Indian – New York.

Bradley Pecore (Menominee/Stockbridge-Munsee/Mohican) is Curatorial Resident at the National Museum of the American Indian in New York.