The Great Inka Road: The Integration of an Andean Empire

According to Andean legend, the ancient Inka would crack their whips and massive stones would miraculously fall into line and stack themselves into remarkable works of construction. 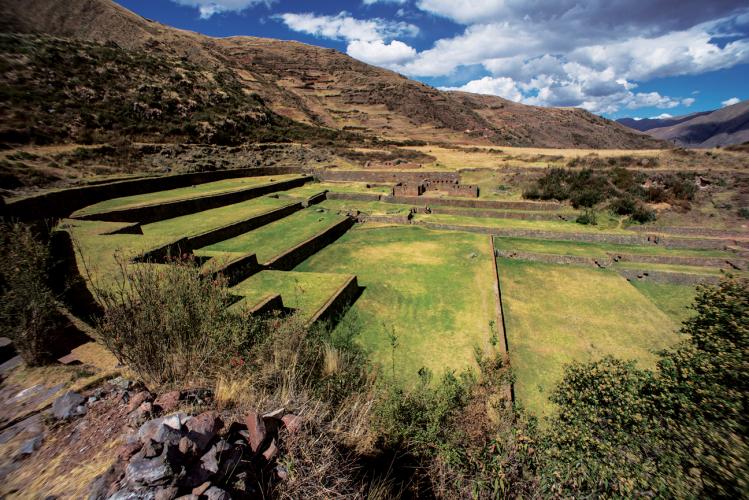 Tipon, near Cusco, a wonder of Inka irrigation and hydraulic engineering. Photo by Doug McMains

Tipon, near Cusco, a wonder of Inka irrigation and hydraulic engineering. Photo by Doug McMains 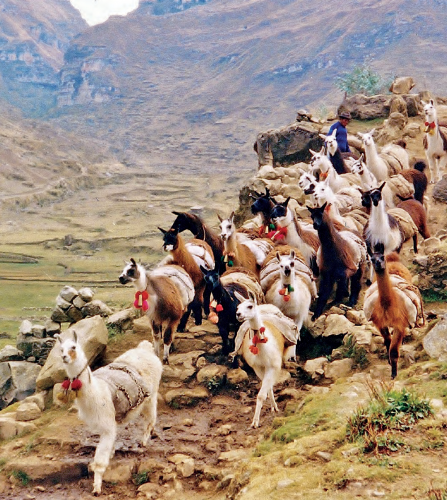 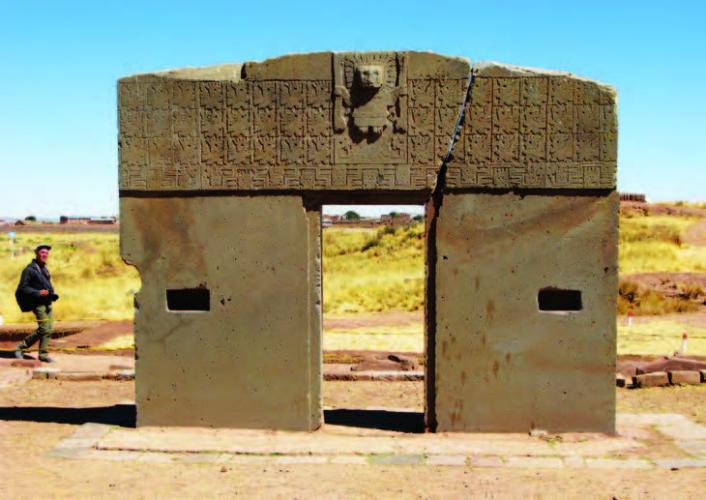 The Sun Gate at Tiwanaku. A relief of the Andean creator god, Tiqzi Wiracocha, in the center of the gate. The figure holds a thunderbolt in each hand. Tiwanaku, Bolivia, 2009. Photo by Wayne Smith

The Sun Gate at Tiwanaku. A relief of the Andean creator god, Tiqzi Wiracocha, in the center of the gate. The figure holds a thunderbolt in each hand. Tiwanaku, Bolivia, 2009. Photo by Wayne Smith 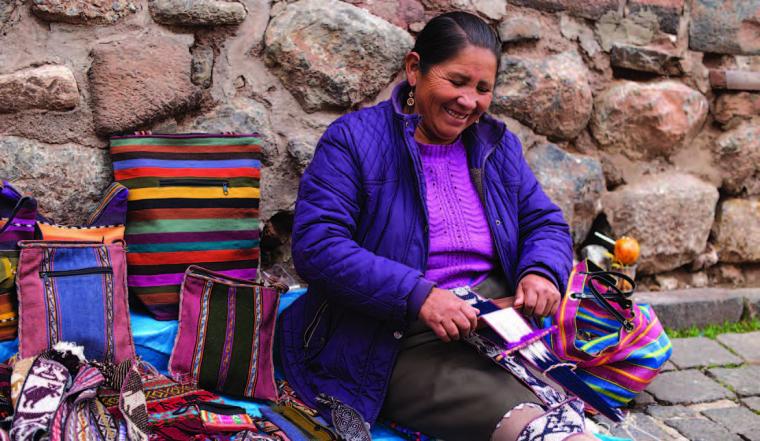 A woman weaving in Cusco, 2014. Photo by Doug McMains

A woman weaving in Cusco, 2014. Photo by Doug McMains 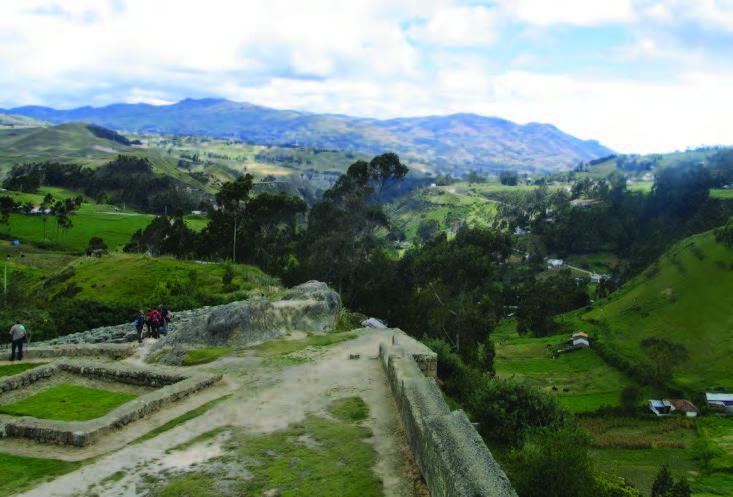 Valley view from the heights of Puka Pukara, on the way to the Antisusu. Photo by Ramiro Matos Mendieta

Valley view from the heights of Puka Pukara, on the way to the Antisusu. Photo by Ramiro Matos Mendieta

Sixty-four-year-old Nazaria Meza, from the Quechua community of Chawaytiri, related the story to me and a group of travelers as we hiked along one of the main trails leading out of the city of Cusco, Peru. “We don’t know anymore just how they made such a road,” said Nazaria, elder and grandmother, about her Inka ancestors. “But when we walk our llamas along the Inka Road, we feel strong in our hearts.”

Qhapaq Nan, the sacred road of the ancient Inka sovereign and an intricate system blanketing a 25,000-mile expanse, stands today as the physical remnant of a highly organized American empire, both politically and economically. Unparalleled in hemispheric history for its capacity to integrate a wide range of people and resources over a huge and difficult geography, the Qhapaq Nan still functions as a series of living roads traveled by indigenous peoples over long stretches of Andean landscape.

The magnificent Andean mountain ranges run the length of western South America, from southern Chile to Colombia. Dropping east to the jungles and west to the sea, the Andes are a monumental and aggressive terrain, difficult to traverse and even harder to integrate into large-scale human endeavor.

Altitudes in the Andes range from 11,000 to 16,000 feet above sea level. A vertical world of extensive, abrupt, often impassable ranges, it is also a world of great promise. The Andes enjoy many ecological zones. A great variety of horticulture is possible, if terraces can be built into landscapes and the transport of goods can be safely organized.

The great human effort required to organize the Andean world was most expansively and adeptly accomplished by the Inka Empire. On the heels of earlier civilizations the Inka created a great road network crossing high sierras, punas, deserts and coast – even penetrating deep into the jungle. As scholar Victoria Castro has written, theirs was an “ingenious humanization of a fractured geography.”

The Andes nurtured numerous nations and several civilizations before the Inka emergence. The Inka are particularly recognized for integrating knowledge from earlier civilizations, such as the Wari and Tiwanaku, for incorporating ancient trails into roads, and for concentrating the ancestral knowledge of many cultures in the Andean region. The integration took place at many levels: the interpretation and practice of cosmology, local social organization and state administration. A redistributive system, grounded in the principle of reciprocity, sustained the empire.

The Inka accomplished their feats of empire building by founding and expanding from a central administrative and religious center, the capital city of Cusco. The chawpi, or the center, of the Inka Empire is here. It is the home region, marked by a deep and abiding mytho-historical narrative and forever identified with the brilliant figure of the greatest of the Inka rulers, Pachacutic, who ruled from 1438 to 1471 AD.

The long-lived Pachacutic a legend in his own time, engineered much of the style and form of his world. Credited with saving Cusco from an invasion from the enemy Chanca, whom he later vanquished, Pachacutic went on to redesign the city and its valleys, forging rivers into water canal systems, carving horizontal terraces into steep mountains to recover agricultural land, and establishing an Inka mastery of engineering and architecture that organized the labor and military service of tens of thousands.

The dynasty of Inka sovereigns begins in the mythological narratives of oral memory and bridges into modern history in the legend and physical presence of Pachacutic.

In the mythological creation, the original couples – the ayares, four couples from one panaka, or extended family – emerged from caves at Pacariqtambo and, before that (in a different version), from the waters of Lake Titicaca. These principals, Manco Qapac and Mama Occllo, gathered the ten first communities (ayllus) and began a journey, the first journey of the Inka Road. They came with a mandate from Inti, the Sun. Inka legend tells that before their emergence, chaos and violence ruled the Andes; people “lived like fierce and brutish animals.”

“Our Father, the Sun,” the Inka historian Garcilaso de la Vega recounted in 1609, “...having pity upon them sent from the sky to the earth a son and a daughter of his, to teach them...precepts and laws to live in reason.” The Sun instructed these primordial and mythic-historical Inka, according to Garcilaso, that they should conquer and incorporate the human beings to a “system of reason and justice, with pity, clemency and calm...as with tender and well-loved children.”

Garcilaso is not always the most accepted of early witnesses, writing some 60 years after the conquest, but the impetus to organization by the Inka state is widely acknowledged. Historians often comment on the Inka’s organizational skill. “In everything from the most important to the most trifling, there was order and methodical arrangement,” wrote the 20th century scholar Lewis Hanke. “Men had honorable and useful occupations…lands, mines, pastures, hunting lands, woods; and all kinds of employments were so managed that each person knew and held his own state.”

Through the Chaski or post “runner” system, and in the accounting of materials and people through khipu, the Inka imperial capital had accurate and timely intelligence. In this sense, all roads led to Cusco. “In each district of the four in which they divided their empire, the Inka had councils of war, justice, treasury,” wrote Hanke. “Each of these councils had their ministries and ministers and subordinates from major to minor...from decurions that handled ten to others who handled hundreds, thousands and tens of thousands. From grade to grade, these levels gave count of everything there was in the empire to the supreme councils. The council presidents of each district received the sum of reason of everything that happened in the empire, to give count of it to the Inka.”

Over time, from the primordial ayar couple, Manco Capac and Mama Occllo, and following the line of eight Inkas, there is a progressive conquest of the immediate Cuzco region, settling Inka dominance of its highly productive sacred valley. According to legend, through this first line of Inka sovereigns, instruction and organization of conquered peoples was integral to the expansion of Inka polity. Inka systematically integrated new populations, introducing standardization in their arts and trades, agricultural practices and crops, architectural skills and other knowledge.

With the advent of Pachacutic, and his two successive generations – son, Tupa Inka Yupanqui; grandson, Huaynacapac – an American indigenous polity of major proportions was integrated under a single political system, an empirical feat of governance unequaled in that vast region, before or since.

Pachacutic and his line of three generations – over one incredibly ambitious century starting around 1438 AD – organized and built the major urban centers, terraces, canals and aqueducts, storehouses and roads, built or rebuilt citadels such as Macchu Picchu, Ollantaytambo, Huanuco Pampa, Cajamarca, Tomebamba, Wakarapukara (the list is long). They deployed the most skilled diplomacy, directed the most strategic wars (excelling at provisioning troops), built countless bridges and roads, training and commanding administrators and engineers, huge numbers of skilled artisans, agriculturalists, construction workers. The three generations of Pachacutic’s line expanded to the four directions, the “four quarters,” or suyos, of the Tawantinsuyu, developing highly complex systems in architecture, agriculture and social organization.

Wrote the earliest Spanish chronicler, Pedro Cieza de Leon: “The Christians were amazed to see such great reason in the Indians, the vast amounts of provisions of all kinds that they had, and the extent of their highways and how clean and filled with lodgings they were.”

Pachacutic took his conquests first west and then far to the north and south. He fully consolidated Inka hold of the sacred Urubamba River valley, the agricultural bread basket. Countless caciques fell to his campaigns as he punished all weak and treacherous neighbors. He saw and took the ancient complex of Tiwanaku, subjugating “all the towns and nations surrounding the great Lake Titicaca,” and sent expeditions north to the region of present-day Cuenca, Ecuador. Colonial-era chronicler, Father Bernabe Cobo records that so quick and efficient were his bridge-building engineers that at least once their wondrous constructions impressed resisting nations into surrender. Vast herds of llama and alpaca, major agricultural valleys, rich mining and salt deposits, and other economic rewards raised the power of the Inka sovereign.

Pachacutic’s sucession was as orderly and efficient as his reign. As he aged, he slowly introduced a favored and proven son, Topa, to the reins of government. Topa Inka Yapanqui, who ruled from 1471 to 1493, consolidated his father’s dominions, quashing rebellious provinces along the way, as he expanded the empire to the north and east, traveling and building on the Antisuyo road to secure precious woods, fine feathers, coveted plant medicines and gold of the tropical Amazonian foothills. He next went north beyond his father’s Tomebamba to the “Edge of the Kingdom of Quito,” which he besieged and conquered. He consolidated the central coast by a negotiated conquest of the Empire of Chimu.

Topa Inka took his exploits south to the Maule River, building roads deep into today’s central Chile. At the Maule, the Inka army met its match in the fierce resistance of the Mapuche warriors, defining “the edge of his [Topa Inka]’s empire; and the dominions of the Inka never passed that line, then or after.”

Topa Inka’s son, Huaynacapac, “the last true Inka,” according to Cobo, took seriously the patrilineal mandate to expand his own portion of the Empire. He did so by “incorporating much of what is now modern Ecuador as well as the northeastern Peruvian Andes,” writes Gordon F. McEwan. A brilliant general, Huaynacapac spent so much time in his northern military campaigns that the central governmental fabric was seriously strained. The now vast empire suffered from his distance from Cusco, while the Inka appeared to set up a rival court in the northern Inka center of Tomebamba.

Huaynacapac’s absence from Cusco – sacred city and center of administrative equilibrium – signaled a power vacuum that would usher the empire’s destruction. In 1527, a new disease (likely smallpox) reached his northern court, just ahead of the Spanish conquistadores. It rapidly killed the Inka along with many high-ranking generals and officials, and most tragically for the empire, his designated heir. The lack of orderly succession opened doors to chaos and a ruinous civil war into which walked the Spanish conquistador, Francisco Pizarro and his band of soldiers.

José Barreiro, Smithsonian Scholar Emeritus, is a member of the Taíno Nation of the Antilles. He is co-curator of the NMAI exhibition, “Taino: Native Heritage and Identity in the Caribbean.”