Two unsolved Native mysteries lie in the heart of Washington, D.C. in a quiet cemetery along the banks of the Anacostia River. Their resting place is the Congressional Cemetery, founded in 1807, about two miles behind the Capitol, for representatives from around the country who could not be transported home for interment. Contrary to its name, it holds very few Members of Congress among its 55,000 burials, but does include 36 American Indian leaders. 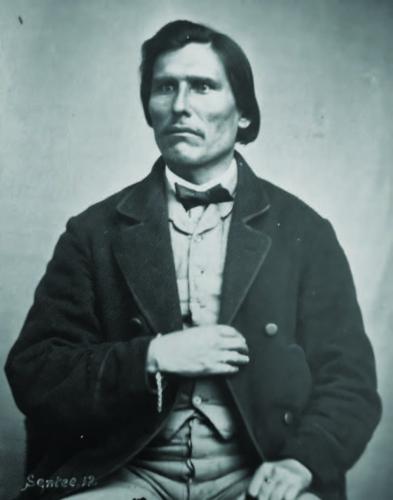 Members of the Yankton, Santee Sioux (Dakota), and Upper Missouri Sioux tribes delegation meet with President Andrew Johnson in the East Room of the White House in February 1867. This engraving from Harper’s Weekly was based on a photograph by Alexander Gardner (1821-1882). Courtesy Library of Congress.

Members of the Yankton, Santee Sioux (Dakota), and Upper Missouri Sioux tribes delegation meet with President Andrew Johnson in the East Room of the White House in February 1867. This engraving from Harper’s Weekly was based on a photograph by Alexander Gardner (1821-1882). Courtesy Library of Congress. 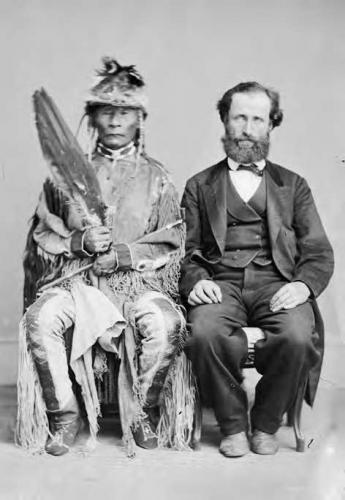 These Native diplomats and tribal leaders had come to the nation’s capital to fight for rights, negotiate treaties or settle debts owed to them. Most of the interred succumbed to disease. But two of the cemetery’s Indian residents died under mysterious circumstances, possibly homicide. These two cases remain unsolved, reminding us that Washington, D.C. was not a friendly environment for the Native leaders who made the long and dangerous journey to the nation’s capital.

One of these mysteries involves Scarlet Crow (Kan Ya Tu Duta) of the Wahpeton Sisseton Sioux Tribe. Scarlet Crow arrived in D.C. as part of a Dakota delegation. They came to sign a treaty that Scarlet Crow adamantly opposed. On Feb. 24, 1867, he disappeared from the barracks where his delegation was staying. His fellow tribesmen were immediately concerned. They requested an official search. The Indian Bureau placed an ad in the lost-and-found section of the Washington Chronicle containing his description and a reward for information leading to his return.

Two weeks after his disappearance, his remains were discovered in the woods near the Aqueduct Bridge (today the Key Bridge) in Arlington, Va. According to documents published by the University of North Dakota in 2006, his remains were found by a man named John Birch and a boy named Joseph Golden who were searching for a lost cow. They reported the body to a county officer who claimed the reward and reported it to Indian Agent Joseph Brown.

Scarlet Crow appeared to have hung himself from a branch with a strip of his own green, three-point blanket. At the scene, Agent Brown noted that the type of knots in the blanket were not those used by Native people. The rest of the blanket was tucked in around Crow’s body, suggesting someone else had been there. Additionally, the branch couldn’t support the weight of a small child, but Scarlet Crow appeared to have been well-fed and only recently deceased.

Brown, the Indian Agent, suspected that the people who had reported the body were responsible for the death and advised against paying the reward. Brown didn’t want to set a precedent of paying rewards for dead Native delegates, but he also did not want to accuse his suspects without evidence. So the reward was paid. The investigation ended quickly. Suicide remains the official cause of death. Scarlet Crow’s son, Sam Crow, petitioned Congress for a headstone in 1912. Congress finally placed a marker on his grave in 1916 – 49 years after his death.

The second mystery concerns Ut-Sin- Malikan of the Nez Perce Nation. His aged marker is chipped and sunken deep into the marshy hallowed ground. His name is barely legible, eroded away over time, and many of the details of his story have also been lost. Ut- Sin-Malikan signed treaties with the U.S. in 1855 and 1863. In 1868 he was one of four Nez Perce delegates to travel to D.C. for the negotiation of a new treaty that would divide their homeland and also to petition for payment of annuities from previous treaties that had not been paid for years. The other delegates were Chief Tamason or Timothy, Chief Lawyer and Chief Kalkalshuatash, also known as Jason.

The delegation traveled by ship from Portland to New York City, a four-and-a-half week journey. According to family history and the book Hear Me My Chiefs, Ut-Sin-Malikan was against the further division of Nez Perce land when he arrived in Washington in 1868. He became ill, and the official cause of death is typhoid fever. Most published works that include his name simply state that he died from an illness. But the book Hear My Chiefs and family tradition maintains that he was shoved to his death from his hotel window.

A Quaker who attended the funeral noted the “Chiefs chanted what appeared to be a hymn, mournfully and very slowly. Then each Chief shook the hand of the (deceased) for some time, as bidding (him) a long farewell.” We may never know the details of his story but he is not forgotten by his family or his people. They still know where he is buried. He is honored when the tribe visits Washington, D.C.

Native Nations have a long political relationship with the U.S. government. It is appropriate that evidence of this history resides in one of the oldest cemeteries in Washington, D.C.

Rachael Cassidy (Cherokee Nation of Oklahoma) is a cultural interpreter at the Smithsonian’s National Museum of the American Indian in Washington, D.C.