Four colors – black, red, blue and green – have consistently been used on the Northwest Coast for thousands of years in spite of outside influences and the historic availability of an infinite array of colors. The integration of this color palette with the cosmologies, rituals and daily life of Northwest Coast indigenous peoples has become as important as the form and function of objects, the unique structure of the art form and is so iconic the entire coast is identified with and by these colors. 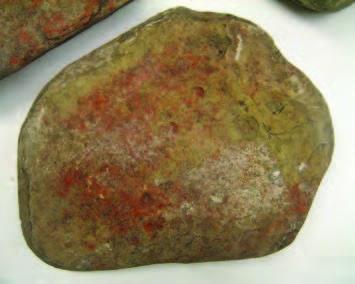 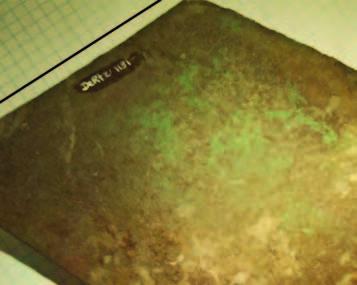 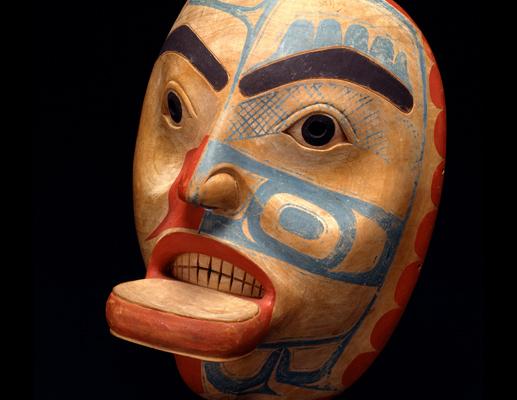 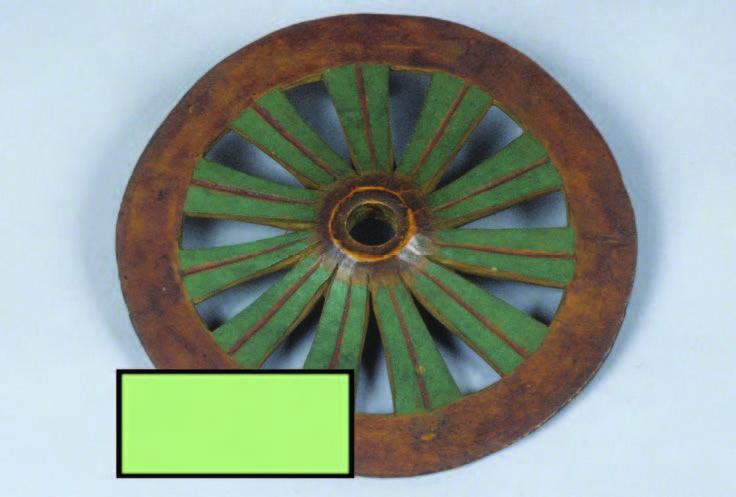 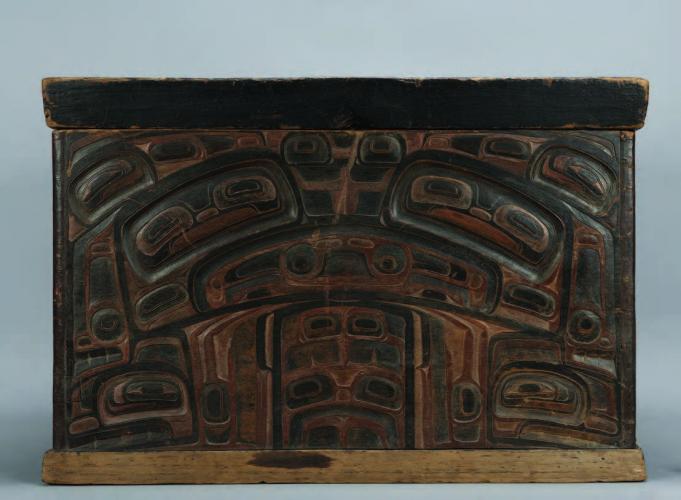 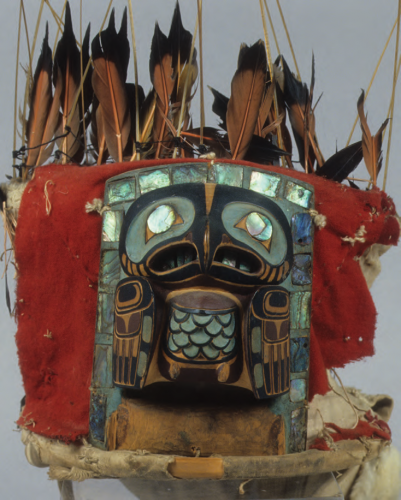 Black and red are the two oldest paint colors worldwide; there is no way of knowing exactly how far back the use of black goes, but red from red ochre has been used for at least 100,000 years around the world. I have documented its use on the Northwest Coast for at least 4,000 years. While black and red are easily identified and the history of their use is undisputed, the identification of the blue and green pigments has been more elusive.

Until 1990 there had been no analysis of the green pigment; it was, and is still commonly thought to be a copper derivative (the blue pigment is presumed to be as well). In fact, neither green nor blue are copper derivatives: the green pigment is the iron silicate mineral known as celadonite, or green earth; the blue pigment is an iron phosphate mineral called vivianite. Although the substance used to make the wide array of blues used by Northwest Coast artists was previously unidentified, using scanning electron microscopy to analyze a sample given to me, in 2010 I was able correctly to determine the mineral. Subsequent analysis of samples from a broad selection of artifacts demonstrates a lavish use of both vivianite and celadonite by all culture groups of the Northwest Coast. However, I have focused my research primarily on Haida and Tlingit painted objects because these two groups are represented by the largest collections worldwide.

Northwest Coast Natives have long-standing rules about design elements and about color use. Haida, Tlingit and Tsimshian artifacts clearly show color schemes based on a long tradition (at least 2,000 years) of designs composed of primary, secondary, tertiary and negative fields. On two-dimensional pieces such as chests (see page 16) and panels black customarily fills the primary fields and red fills secondary fields. Tertiary fields are left unpainted or are blue or green (never both on the same object). On three-dimensional pieces such as rattles and masks, the fields are not so clearly demarcated. For instance, the eyebrows on masks are usually painted black, red fills the lips and nostrils, and blue or green, if present, represent the color of skin or “tattooing.” (See Haida mask, previous page.)

As with rules about design composition and the use of color, for all Northwest Coast objects ancient conventions dictate the customary ways of painting specific pieces. After studying hundreds of Tlingit and Haida artifacts I have noted that the Tlingit use vivianite primarily for the accoutrement of shamans (because it is a transformational material, vivianite would be highly prized by shamans), for clan at.’oowu (treasures), ceremonial and ritual pieces, and for warrior armor, particularly their carved helmets. Blue also seems to be reserved to distinguish the nobility of Tlingit society. While all evidence points to the Tlingit having proscriptions against using blue on mundane types of work, Haida work does not indicate any restrictions about the type of work blue could be used on and I have found vivianite on all manner of Haida artefacts.

Vivianite is a simple iron phosphate mineral with complex behaviors and is found all over the world. Freshly unearthed vivianite presents as white or the same color as the surrounding earth but rapidly (within an hour if it is sunny) begins changing color to blue due to a photochemical reaction (exposure to light) as well as subsequent oxidation. The color range is pale blue to deep blue and into deep bluish green, olive and a dark olive-brown. This color change can persist over a period of hundreds of years until there is no visual evidence of blue remaining. (See Haida chest, above.)

After closely examining objects to determine of what the paint consists and how it was applied, I have come to believe there was little, if any, manipulation such as altering (beyond grinding) or mixing two or more materials together to create a color. All appearances indicate the pigments were simply ground and mixed with a variety of binders including fish egg “soup” (broken fish eggs from which the membranes have been skimmed), animal and fish fats or blood and hide glue (made from boiling fish skins or animal hides, bones and hooves to extract the gelatin). With any of these binders come problems with mixing paint, storage and applications. The greatest problem is that the paint dries in the dish and on the object so fast the paint does not flow. The artist has to make fresh batches frequently and is unable to store it. In spite of the availability of these binders, a large number of artifacts were painted without them. The pigment was simply mixed with water and applied. I have noted that pigment application with water is far more common than application with a binder. I have seen well-used objects such as masks, rattles and clan hats which were only painted with water and pigment where the oils from hands have stained the paint; characteristics like these can give us insights into the handling and use of objects.

Surprisingly, pigments mixed only with water are quite durable: I have documented well-used objects in excess of 400-years old on which the paint is still intact and vibrant. When water is used, the color tends to be true to the pigment; the finish is powdery, like gouache and gives good opacity (coating the substrate so it not visible, as in the Haida frontlet below). When mixed with a binder (of which all I have studied contain animal fats), pigments tend to darken, have a harder, almost plastic finish and a reflective patina. This Coast Salish spindle whorl (see image on page 16) was painted with celadonite and red ochre using water as a binder. The lanolin from the wool spun on the whorl has soaked into the pigments, darkening them and changing the patina. When a binder was used it was usually fat-based, which causes the color of the pigment to darken significantly. The paint takes on a satiny, reflective finish and is usually a cohesive film. With paint that has no binder, the pigment remains true to the original color; it does not darken and it has a powdery, gouache-like finish that does not reflect light.

It is of critical and immediate importance for artists, conservators, historians and curators who seek to use, study and understand paint on Northwest Coast objects to become familiar with how pigments behave with different binders, conservation techniques and storage conditions. Vivianite in particular has complex behaviors, transforming both color and state. Add to these factors the problems of being mixed with various binders, treatment with conservation materials, and any number of other variables and it becomes difficult to identify the exact culprit, or culprits, in color changes. These factors are not all known yet; recent discoveries of vivianite on masterpieces by Rembrandt, Vermeer, Dou and De Cuyp have European conservators avidly studying what causes its color changes. The alteration process is ongoing and of concern for the proper storage, conservation and restoration of artifacts bearing vivianite.

A multidiscipline approach that integrates science, technology, culture, history and art can be of immense help in identifying particular artists or objects made by the same artist, dating artifacts and determining other factors relevant to the manufacture of the pigment and painted object. It can also assist in identifying from which deposit or locale a pigment sample comes. Being able to more closely match objects to their point of origin and date of manufacture will help us build a more comprehensive view of how these objects fit into the culture of origin and that culture’s evolution.

By studying pigment and paint technology we are given insights into the complex critical thinking and technical skills (which included an understanding of geology and chemistry) of individual artists as well as the cultures in which they lived. We start seeing how, as much as art form, color has become iconic of the arts of the Northwest Coast, how it has helped define and distinguish artistic traditions, how it is integral to the belief systems, how it signified social structure and cultural identity, and how it has played a significant role throughout Northwest Coast history. Not just modern artists, but their entire communities hold on to these four colors as enduring commitments to their past and lodestars of their future.

Melonie Ancheta has been a professional Northwest Coast Native artist for more than 20 years. Her research in Northwest Coast pigment and paint technology came from a desire to use traditional materials and methods in her own artwork. She writes, lectures and gives workshops all over the U.S. and Canada.