The Delawares of Kansas and Indian Territory joined the Union Army in extraordinary numbers. Out of a total of 201 eligible Delaware males between 18 and 45 years of age in 1862, 170 volunteered for service. The most heralded of these was Black Beaver [Suck-tum-mah-kway] (1806-1880). 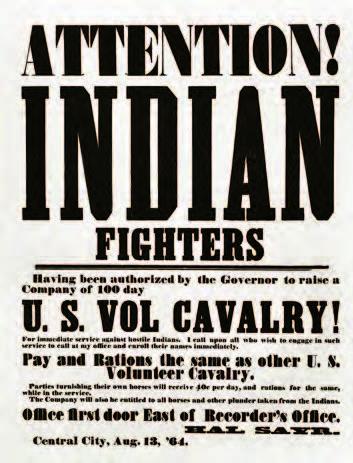 This poster was circulated in Central City and the Front Range area of Colorado in the late summer and early fall of 1864 as a recruitment tool for the 3rd Colorado Cavalry. The 3rd was the volunteer regiment involved in the Sand Creek Massacre in November 1864. History Colorado, Denver, Colo. No. 10025731

This poster was circulated in Central City and the Front Range area of Colorado in the late summer and early fall of 1864 as a recruitment tool for the 3rd Colorado Cavalry. The 3rd was the volunteer regiment involved in the Sand Creek Massacre in November 1864. History Colorado, Denver, Colo. No. 10025731

The Delaware primarily served as scouts and home guards, and long before the outbreak of the Civil War, Black Beaver was recognized as one of the most accomplished Indian scouts in North America. He was born in Belleville, Ill., in 1806, the son of a chief, Captain Patterson. From 1824 onward, his name appears frequently in the historical record.

In 1834, he served as guide and interpreter for General Henry Leavenworth, as well as interpreter for Colonel Richard Dodge’s councils with the Comanche, Kiowa and Wichita Indians on the upper Red River. For 10 years in the 1830s and 1840s, Black Beaver was an employee of the American Fur Company.

In the era of the mountain men, the noted Delaware “visited nearly every point of interest within the limits of our unsettled territory. He had set his traps and spread his blanket upon the headwaters of the Missouri and Columbia; and his wanderings had led him south of the Colorado and Gila and thence to the shores of the Pacific in Southern California,” according to General William Randolph Marcy.

When the Rocky Mountain fur trade declined in the 1840s, Black Beaver turned to guiding wagon trains westward. He also guided an expedition of the naturalist painter, John Audubon. During the Mexican War, in San Antonio, he raised a company of Delaware and Shawnee Indians, Black Beaver’s Spy Company, Indian, Texas Mounted Volunteers. As the captain of the company, he served under General William S. Harney’s command during the fighting. After the war, Black Beaver continued to serve the United States Army under contract as a scout.

By the 1850s, Black Beaver and other Delawares were employed by military officials as well as by the various Indian agents at Fort Arbuckle and Fort Cobb as guides and interpreters. Black Beaver reportedly spoke English, French, Spanish and about eight different Indian languages. He was also adept at Indian sign language. In 1858, he even served as a guide for the future Confederate Colonel Douglas Cooper, during Cooper’s stint as Federal agent for the Chickasaws.

Black Beaver put this experience at the service of the Union early in the Civil War. In need of troops in the East and realizing that Indian Territory was surrounded by secessionist states, federal officials began an evacuation of Indian Territory in the spring of 1861. At that time, Black Beaver, well into his 50s, was leading a respected and comfortable life on his farm near Fort Arbuckle. According to the local Indian agent, Black Beaver had the most substantial residence on the reservation, “a pretty good double log house, with two shed rooms in the rear, a porch in front and two fireplaces, and a field of forty-one-and-a-half acres enclosed with a good stake-and-rider fence, thirty-six-and-a-half of which have been cultivated.” He was gainfully employed as the interpreter for the Wichitas, working for Matthew Leeper, the Indian agent.

On April 16, 1861, the Union, under the command of Colonel William H. Emory, quickly abandoned Fort Washita and withdrew north. Emory had been under orders to withdraw troops in the event that Arkansas passed an act of secession. But fearing the reported advance of Confederate troops from Arkansas and Texas, Emory was forced to act without orders.

After concentrating his forces at Fort Cobb, the colonel moved his troops against a Confederate advance guard of William W. Averell’s Texas Mounted Rifles. According to Emory, Black Beaver warned him of the approaching Confederate column and “gave me the information by which I was enabled to capture the enemy’s advance guard, the first prisoners captured in the war.”

The Delaware scout then guided Emory’s forces and his Confederate prisoners northwest to Kansas. Black Beaver was the only Indian who “would consent to guide the column.” The Union expedition was composed of the combined commands of Forts Arbuckle, Cobb and Smith, the largest remaining concentration of federal troops in Indian Territory. It eventually arrived at Fort Leavenworth on May 31. Despite this dangerous mission through Confederate occupied territory, hundreds of miles across open prairie, the column arrived “without the loss of a man, horse, or wagon, although two men deserted on the journey.”

Later in the Civil War, Black Beaver’s name was evoked by Union officials seeking to win support from Tusaqueh, the Wichita chief, as well as other leaders in southern Indian Territory. Union agent E.H. Carruth invited the Wichita chief and his delegates to come to Kansas to meet with him: “Your friend Black Beaver will meet you here and we will drive the bad men who entered your company last spring. The Texans have killed the Wichitas; we will punish the Texans.” Throughout the war, both Confederate and Union dispatches indicate Black Beaver’s continuing role as a valuable Union scout.

As a result of Black Beaver’s support of the Union during the war, Confederate officials later seized his cattle, horses and crops and destroyed his farm. They also placed a contract on his head, making it impossible for him to return to the agency during the war. Until his death in 1880, Black Beaver attempted without success to secure compensation for his sizable loss, estimated at about $5,000, while in federal service as a scout. In the late 1880s, his daughter, Lucy Pruner, was still writing in vain to the government, trying to collect the monetary damages promised to her father more than 25 years before.

The Delawares had suffered significantly during the war. Their two communities were harrassed by bushwhackers, who, according to one oral history, “robbed them and then shoveled live coals from the fireplaces onto their mattresses, setting fire to their cabins.” The infamous marauder, William C. Quantrill, operated in their territory for a time. According to one account, White Turkey, a Delaware scout and trapper, pursued Quantrill after his famous raid on Lawrence , Kan., in August 1863, picking off some of the border ruffian’s men.

Writing in September 1863, John G. Pratt, the Indian agent of the Central Superintendency, described the Delaware’s plight: “The Delawares are affected by the unsettled conditions of the country. Many of them are in the army. Their families are consequently left without male assistance. The large children are withdrawn to labor at home.”

By the end of the conflict, Interior Department officials advocated removal of the Delaware from Kansas. In two treaties, signed in 1866 and 1867, tribal leaders reluctantly agreed to sell all of their lands in Kansas and to remove to lands in the Cherokee Nation, purchasing Cherokee citizenship rights. Kansas and Washington politicians, traders and railroad officials profited greatly from the deal. Included in the profiteering was John C. Fremont, the Delaware’s “friend,” who was now a railroad magnate.

Black Beaver lived his remaining years at Anadarko as an “Absentee Delaware,” surrounded by Caddo in southwestern Indian Territory. In 1872, he was the Absentee Delaware representative in an Indian delegation to Washington.

He continued to play the role of mediator. Visiting the Kiowa-Comanche Agency in 1874, he begged these southern Plains Indians “to stop raiding, to send their children to school, to settle down and do as their friends the Quakers wished them to do.” The former rugged mountain man died in 1880, shortly after he had become a Baptist minister.

In 1954, a bust of Black Beaver was exhibited in the rotunda of the state capitol at Oklahoma City. It was later moved to Anadarko, where Black Beaver was subsequently honored as the first person to be inducted into the Indian Hall of Fame.

The advances in military technology developed in four years of war were soon employed in “pacification” campaigns against Indians defending their homelands on the Great Plains and in the Southwest. The congressional passage of the Transcontinental Railroad bill in 1862 and the railroad’s completion in 1869 contributed to the disruption of traditional Plains Indian life. It resulted in the extermination of bison herds, brought massive non-Indian population westward, increased Indian–white tension and conflicts, and led to reservation existence and overall Indian dependence. It further opened the Trans-Mississippi West for non-Indian settlement and resource development, putting even more pressures on Native peoples and their lands, eventually leading to federal allotment policies and to even more dispossession. Thus, to American Indians, the war brought only misery, followed by even more misery.